I recently posted that about what hot-air rework station I would buy if I had to buy one right now. Since then I’ve been doing some research, and now I’m not quite so sure anymore… 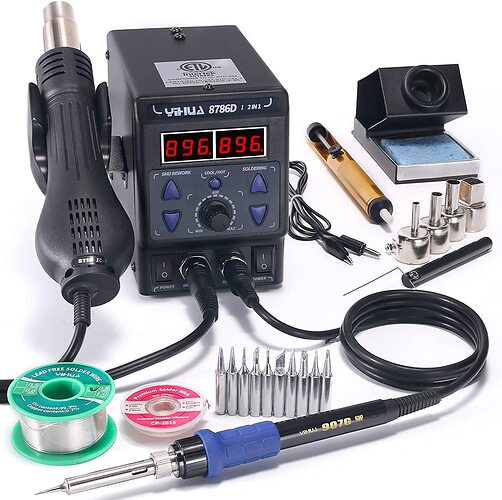 This is a pretty basic combination soldering and hot-air station. While the soldering iron is not bad, I don’t actually use it because I have a better one.
The hot-air handle is pretty much the same as thousands of other hot-air stations, where pretty much everything is in the handle. These stations are cheap, which is nice, but my problem with it is that the air speed can’t really be turned down far enough, so you have to be really careful when using it, or it will blow away small components.

What I said I would buy 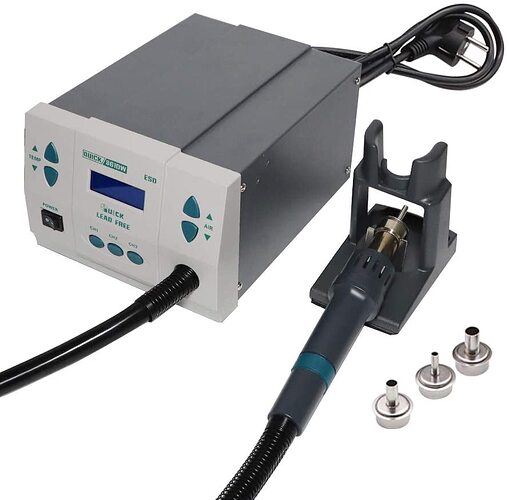 This one is widely recommended on other forums for hobbyists. The construction is a better, and the blower is in the base unit instead of the handle. People rave about how hot and how fast it can blow, which I guess is great, but I haven’t seen any information about how slow it can go, which is really what I want. In general, nobody who reviews hot-air stations seems to care about the minimum speed.

The more money then sense option 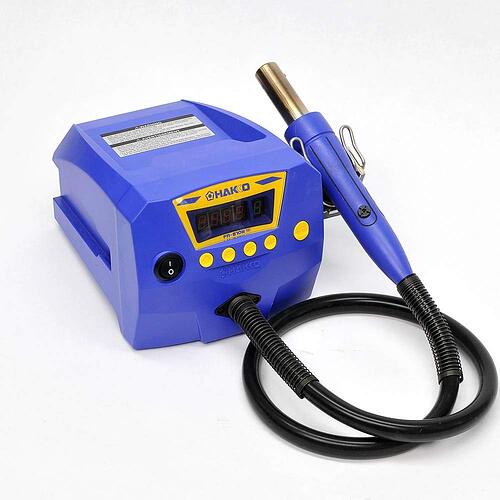 If you happen to have $850, and nothing to spend it on, this is supposed to be the best hot-air station there is. In addition to the basic hot-air functionality, this also has a vacuum pump that connects to a small pipe coming out of the middle of the hot-air stream. This allows you to pick up chips directly with the handle, at least if the chip is big enough for a suction cup to fit on it. This thing is also meant to work together with a pre-heating pan and an arm thing that should make it absolutely fantastic for working with large chips. For fixing graphics cards and laptops, this is probably the best there is. For my use, it’s probably not. 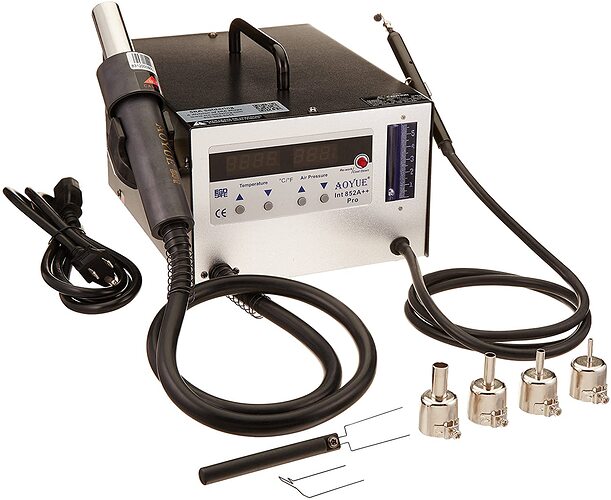 Color:Rework station SMD Reworking tool designed to remove and/or repair surface mounted devices such as SOIC, CHIP, QFP, BLCC, BGA, and so on. It has several advanced features such as the auto nozzle cooling...

I’ve used a different version of this, and I liked it. Unlike all the other units in this list, it uses a diaphragm air pump. This makes it noisier than many other options, but I do wonder if it doesn’t give better control over the air flow at lower rates. On the flip side, the air pump cannot produce as much air flow as a blower, so if you need that, this is probably not the right choice.

https://www.amazon.com/dp/B07XPG8VPG
I would have already bought this one, because the thinner ligher hot-air pencil looks like it might be exactly what I need. However, I just couldn’t get past the fact that they literally put “A MUST for Fixing Small PCB’s, Mobile Phones & Tablets!” in the name of the product to make it seem better than it is. Now it doesn’t seem to be available anymore, and I haven’t found any reviews of this thing that I trust.

Buying a hot air rework station seems to be rather difficult. Only Hakko seems to care enough about quality of their product to sell replacement parts, and of course they are the most expensive. I think maybe I would buy the Aoyue, because it’s relatively inexpensive, and I did like the one I tried before. Although, maybe I will find a better option before I actually need to buy one…

I did happen to buy one of the cheap ones as I’m not sure how much it will be used.
It has as you said in your first example “got all the gubbins in the wand” so is rather bulky to handle i find.
But the fan speed did seem to be quite controlled after I turned it down because I blew off one of the caps.
Once down to about 2 on the scale it worked OK and did not seem to blow hard enough to blow any more components off.
(Although I have only used it once to actually repair something so my experience is basically nill)

If I use it more then I will consider one with a better wand design for better control.

But for now it does what I require it to do.

This is great information. I was looking at a hot air rework station with soldering iron combo as my hot air gun was too big for my workstation so I wanted to get a better soldering iron then what I got plus have a built-in rework hot air station built in.

Dang, hakko is proud of their rework stations! I love my hakko iron but it was 1/8th the cost of the hakko rework above.

I stumbled across an old Hakko hot-air station on ebay. When I looked up the user manual, it turns out that it uses a diaphragm pump, quite similar to the Aoyue station. Looking through their old units, it looks like lots of them did. I wonder why they switched to blowers? Because it’s better? Or because it’s cheaper?

So I bought the Aoyue station.
I haven’t actually used it yet, but I already don’t like it.
Unless I’m missing something, the unit doesn’t actually remember what temperature it was set to when you turn it off, so every time you want to use it you have to set the temperature, which is basically a non-starter for me, regardless of how well it works when you use it.

Did you try #define SAVE_TEMPER…oh nevermind.

You jest, but it turns out that the Aoyue has a Atmega8A processor in it, which can be programmed from Arduino. Since I think the hardware might be fairly reasonable, and it’s mostly the software that is junk, I’m probably going to have a go at reprogramming it.