Hello everyone. Stephen from Powell’s Power-Ups again. Came back to the Crucible in regard to the issue I was having initially following release of OS6. From multiple sabers I work on I am still having the issue of false clashes, false stabs and false thrust ons. It’s getting really frustrating because I have to raise sensitivity to 16 and lower volume down to 1000 or less all the way from my usual 2250 to try and alleviate the issue and even then, it sometimes still triggers. Is this a known issue that is being worked on or what’s up? I install sabers for a lot of folks and as an installer I do my best to give my customers the best so I’d like to give them the most current features and a saber that rocks and works well and is loud as hell, but this issue is really throwing a wrench in things for me. This was NEVER an issue with OS5.9 and before. Anyway looking for some hope!

Here is my config along with some serial monitor output. Im going to do it again with volume lower too.

So this is an issue that hits some people and not others, but we don’t really know why.
If you’re up for it, we can try some proffieos changes to see what helps and what doesn’t.

One possibility of why this is, might be that the ProffieOS 6.x clash detection is sensitive to higher frequencies of sound, possibly as high as 800Hz. So if your font has a lot of sound in the 400-800Hz range, that could trigger 6.x more than 5.x. It’s also possible that things in the hilt like to resonate at these frequencies, which could make things worse. Loose things in particular (loose screws, boards, speakers, cables) can amplify these problems.

Some people stick a little electrical tape under the speaker and/or under the board to create a small amount of cuchioning, but I’m more than happy to explore the software side of things first before we go try a bunch of padding and stuff.

So in that serial monitor output, it looks like clashes are caused mostly by accent swings. I’d be interested to see a test where the swng files are temporarily removed from that font, or better yet, replaced with silence wavs to still see them in serial monitor.
This might help determine if it’s audio volume vibration or motion issue.

I too had the same issue when I first migrated to OS6. But once I upped my clash threshold higher than my usual, everything seems to be a ok for me now. I think OS6 just is more touchy and sensitive with motion and vibrations.

Yeh I must say I’ve been struggling a bit with this. Pre 6.x I would generally set the threshold to 3.9 which seems to have been pretty good, but now I’m having to set it to at least 12 or often even higher. I don’t really understand the finer points of the scale, but my understanding is that pre 6.x, 4.5 was about the highest the clash could be set to. Now that it’s 16, could it be that my 12 setting is actually about the same as my 3.9 on the old scale - as in it’s about four-fifths of maximum?

One question: apart from the define line in the main config, are clash threshold characteristics handled by the prop file or they part of the deeper OS?

The higher limits aren’t scaled though. Unless I did something wrong, the unit for the clash threshold is “G”, as in “one earth gravity”. When I made the change, I asked the motion chip to give us values up to 16Gs, which means more noise on the low end, which hopefully shouldn’t matter.

However, things get a little weird when you reach the high end of the scale, because we normally have 1G straight down, and we do a subtraction to find out if a clash happened or not. The result of that subtraction could go as high as 17G if we go straight up, but only 15G if we go straight down, and around 16 G if we go left/right/forward/backwards. Same thing was true with the old values, except it was 5 up and 3 down. So if your clash threshold was 3.9, some angles cannot generate clashes. That might not matter since a clash is usually a vibration that goes up/down/up/down a few times, but still.

The clash handling is in the prop base so that props can override it, but no prop actually does, except for some props that just don’t want any clashes as all.

Thanks Prof. Really good to know this stuff. I never knew that it was measured in Gs, but I get what you mean re. the extra G allowing for actual gravity.
However, I’m guessing when you say “more noise” you mean that the chip will potentially register very slight activity when there is none, or almost none? Or have I read that wrong? And could that “noise” be the cause of people’s false clashes with 6.5?

I don’t think the noise is an issue. Even with the additional noise from the increased range, the noise ought to be in the milli-G (one thousand of a G) range.

Update. I tried silent swings and still had clashes. Maybe from the smooth swing/hum itself. Next I’m trying a re-engineered chassis to see if I can minimize vibration. I’ll update on that soon.

I’m interested in seeing how this plays out. 1g is basically 9 newtons per kg so convert that over to ft/lbs and compare that to the 16 g limit. I know @profezzorn answered elsewhere that there’s no comparative right now between the old settings and new but still, that factor of 4 and the higher sample rate is coming into play for some of us. Having dealt with this in the automotive and specifically off-road race sector with yaw and roll dynamics affecting the ecu and fuel feed this is neat to see happening w light swords. Maybe offsetting the sample rate with an ignore-x (reduce sample rate or what is actually given acknowledgement) will be an approach?

Update. So after further testing and lots of head scratching and deep thought I was convinced that these false clashes were being generated by speaker vibration. Wasn’t much of an issue for me personally before OS6, but it was now so I went back to the drawing board on the chassis I was using in the particular hilt redesigned it. I adjusted everything I could to make the board, speaker and chassis itself inside the hilt as snug as possible. After reinstall tonight I can say I have it is fixed with my volume at 2000 and clash threshold down to 7.5 (from 1000/16) but I am nervous to push my luck and go lower so I won’t lol, that was never my goal anyway. Only increased volume for shock effect really. Lastly the other modification I did was a strip of double sided foam sticky tape on both the back of the speaker and on the floor of the speaker hole where it inserts (about 2-3mm of foam). This worked great for absorbing vibration! So my issue for the most part is fixed for me and I know what I need to do from here on out, BUT I will say, even if not everyone is having false clashes there are still a lot of folks who had to increase clash threshold, even if just a little so that’s gotta be something right?! But anyway if you are having false clash issues do everything you can to make adjustments to your chassis/board/speaker set up to absorb speaker vibration, especially if you are like me and like them loud as possible. Also I made not other adjustments to my original config file or any of the prop files. Thanks to all who helped. 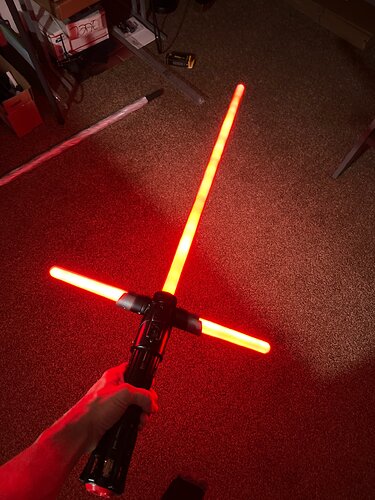 I ended up using a small 1/4”x1/4” piece of nvh strip after seeing a slice of expanding ear protection foam work. Squished the slice up and put it in behind the speaker. The nvh piece rests on the shelf just between the board and speaker portion of the chassis.

Not sure if you saw this but there’s an alternative to better handle speaker vibrations that has worked for those who’ve tested if you want to try it out, it’ll be added to a future OS update but for now it’s available and working via the info here: