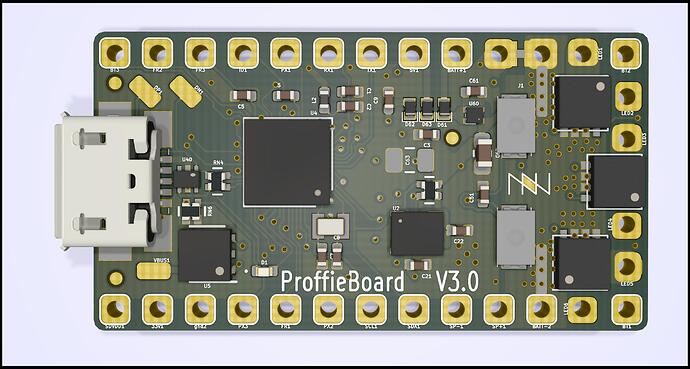 This board will be using a new CPU. The new CPU runs at the same speed and mostly the same as the old CPU, but it has a few important differences: More RAM, FLASH and pins.
Here is a list of improvements I’m making for Proffieboard V3:

All of this in exactly the same size as a Proffieboard V2.

Right now, this board is in the prototyping stage. While most things have already been decided, if something doesn’t work out, there may still be changes.
After prototyping comes beta testing, (which will be by invitation only) Beta testing takes a while because people will need to install boards in sabers, try them out and make sure nothing catches on fire.
Once beta testing is over, we’ll move on to production. And after that I will release all the schematics, BOM and such things so that people can build their own if they wish.

Hi! Thanks for the invite to the new place!
So “blade ID works without additional components” - meaning no pullup resistor specifically? This would be equivalent to the current alternate option of bridging to another pad?

Yep. And it’s not too difficult to guess how it works: Two pads are bridged.

The new CPU has more pins than I have room for on the edge of the board, so a few of them are doubled up, which gives more functionality to some of the existing pads.

is this the C63 pads middle of the board?

also, any chance of getting in on beta testing this?

Yes, that is the C63 pads in the middle of the board.
Hopefully big enough to be relatively easy to hand-solder.
As for getting in on the beta testing: That is done by invite only.

shouldn’t be any harder than the current option, very much appreciated

Significantly easier than the current method, as it doesn’t require any resistor (which people often have trouble soldering). Great solution. Will be a more difficult DIY build, due to the BGA, but as long as you get a stencil it should be fine.

SDIO and full deep-sleep are going to be really impactful.

Any changes to the 5v boost or amp?

No, there is no change to the 5v booster and amp.

Assuming same fets and other ancillary components as well? Should make DIY easier, since many already have those on-hand. There’s a lot of familiarity at first (well, third or fourth, if I’m being honest) glance.

Indeed, a lot of components are the same. However, DIY will definitely be harder. BGA is one reason for this, the other is that these boards do not fit within the oshpark design rules, so you won’t be able to order blanks from oshpark. PCBs could be ordered elsewhere, but it will cost more unless you order in large quantities.

Oh, so Osh is out? What changed with the PCB that disqualifies it (layers, trace size…etc)? I’ve only used Osh and PCBWay, personally, but once specs are out we can research and find the best vendors for each run size.

Ahhhh, that makes sense. Seems like PCBWay does them, but only on 4+ layer boards.

Here is the important question: how do we get in on beta testing?

Have those been sent already? Or pending?

They are pending.
I’m still waiting for my first batch of prototypes so I can make sure that the board works as intended.

Gotcha. Well I guess I shall wait with bated breath. I assume Matt is on the list? I’ll just pick his brain as he tests then haha

Glad to see you onboard Dayadjocen!!! @Verity