unfortunately my daughter decided to charge my saber but used a wrong charger and therefore overcharged. As you can see the board has clearly some burn marks and I would really love to save it somehow rather than spending almost 80-90 euros for a new one.

Can you guys tell from the picture if there is a way to repair the damage? Is the burned out part a overcharging protection? If overcharged is the battery 100% bust or not (battery says it has a overcharge protection too…) ?

Any help is greatly appreciated 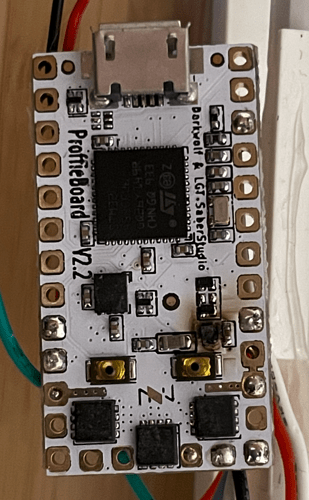 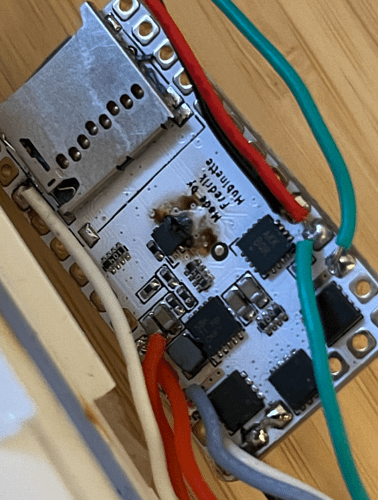 How were you charging it? Were you using a recharge port? Was it a rapid charger (like Samsung uses for phones)?

Not sure how it could blow the board if the RCP was properly wired. Plugging in the charger should disconnect that and make a connection with the battery direct.

here is a picture of the wiring :

what could also be is that the board got damaged by the too hot battery? In the casing they are very close together. But you can see that the board at least has burn marks, I am not sure if this means it is fried oder not though.

Your bigger issue is not having a SD card holder.

It looks like the RCP isn’t wired correctly since there should be five wires coming off the breakout board, two for the switch, and three for the RCP. I only see four?

But yes, some of those components look fried.

Haha yeha the sd card holder just fell off … can’t say I am happy with what crimson dawn shipped here. Anyway there are 4 cables 2 for charging + – and 2 for K+ and L+. It is a one button system if this makes sense?

Yes the question is are they replacable and what parts are they? (I have soldered smaller stuff like charging ports before)

Yes, you have two wires per unlit switch.

Your board is shot regardless. The SD holder is necessary to function.

yes mate but I do not worry to mouch about the sd card holder, this seems like a rather easy fix. I have it here, I can solder it back

In general, if the PCB is fine, all the components on the board can be replaced.
The more pads the components have, the harder it is to replace though.
In you case, two components are obviously damaged, and one is obviously missing: Q7, U60 and D62. However, there may be more components that are broken, just less obviously so.

You can use the partmap in this thread to identify which component is which:

Here’s an updated Part Map for both sides of the V2.2 Proffieboard. Pairs nicely with the BOM here: and this existing partial page of descriptions: https://fredrik.hubbe.net/lightsaber/v5/partmap.html Maybe @profezzorn will get a chance someday to add some more descriptions, maybe swap in this image, etc…

That thread also has a link to the BOM, which specifies what components to use.
Note that some components can be hard to find. In some cases you can replace them with other components, but that can be tricky, depending on how much you know about electronics.

Once you have the components, you will need a hot-air soldering station to do the actual replacing of components. Then you need to test if the board works and figure out if any more components needs to be replaced.

I do get asked from time to time if there is somewhere you can send a board to get it repaired. Unfortunately, so far nobody has taken up doing that on a regular basis, and it would take up too much of my time if I did it myself.

Great thank you, I will then start by try buying the q7, u60 and d62 and try replacing them. I understand that I have a rather high chance of failure but it is worth a try and learning experience.

If all else fails what would be the cheapest way for me to get a new profie ? It feels really bad to have a broken saber here

Haha ok looks like my whole repairing plan is bound to fail directly, first part i looked up ( DMP2075UFDB-7) is OOS everywhere

The Proffieboard V2 design is getting a bit long in the tooth, which means that in addition to the chip shortage, some components just has to be outright replaced because they don’t make them anymore. Not sure if that is the case for these two components or not though.

Correct, it is not ready yet.

It’s been suggested that in the event of D61 dying, that D63 could be used to replace it with, because 5Vpad in to the 3.3v reg is not really a thing, so D63 is expendable?