Hi ,
First post here, assuming asking on the right place.
I made my first build, at least I thought I did until plugged the blade. Nothing, not a pixel.
Saber has crystal chamber and shtok connector with LEDs. No problem with connector or crystal illumination. Sound
is ok and responsive.
Searched here and there… I thought it should be the data cause connector is sharing same LED pads with blade.

Looked with multimeter on board (AC , ground to data pad 1 ), it shows 0,9 when the blade is on. Also I tried with pogo pins on the connector to ground on board.Multimeter shows several numbers…data? voltage?
( sorry I don’t know about this kind of stuff)
I made the blade with shtok blade side connector with LEDs also. I don’t know is there a possibility it causes this. I don’t have any other blade so I’m not able to try with a different one. I have another no LEDs shtok connector though.

I’m sending my config file. Also I can send my wiring diagram if it’s needed

Any help would be appreciated
Thank you…
mysaber_config.h (15.3 KB)

The meter would show small fluctuations when data is present, and nothing when the blade should be off.
I would bet there’s something about how you wired the NPXL connector.
The options for how to use it in parallel, series, or independently can be confusing unless you understand the signal path through the connector. 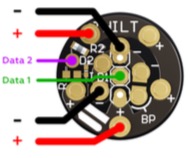 Yes I wired v4. I wanted to separate blade,
connector and crystal.
I can’t check it connector directly now, cause I think it’s impossible after you made the blade. (Phoenix props StarKiller hilt). I wired the connector some time ago but I believe I took R1 resistor. I’m sending my diagram.

But when you said it, I thought if nothing works maybe I could use connectors data.
So 2 blades not 3. But before that I’d like to try to separate connector and blade.

Do you think anything else might cause this
Blade connector maybe? , or something else?

Here is my diagram 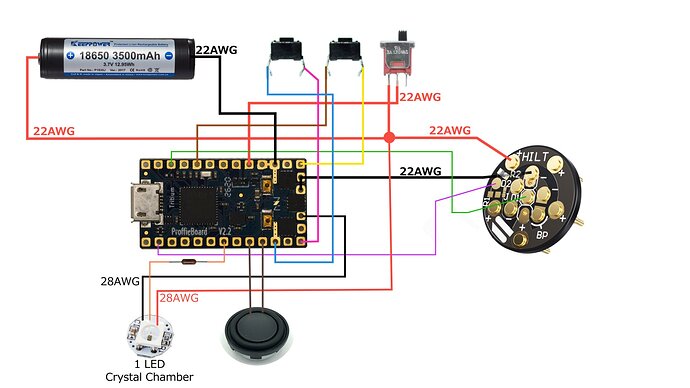 I’ve been writing some pages about how to check neopixel connections.
It’s not finished, but here is what I have so far:

How to test a FET

How to test if data pins are working.

And obviously, you need to check for continuity and shorts…
(And make sure that R1 has been removed.)

maybe I could use

It would certainly make things easier to test if you had another Pogo connector.
Might just want to open the blade again and run a temporary wire right to the strips from a battery and data 1

Thanks for the links. By the way if I changed to data 2 for the blade do I have to add resistor ? Is connectors resistor enough?

The connector has no resistor for the central pin, so you would need to add a resistor.

Got it! thank you

Btw, you could set up that Shtok connector in V3 Mode (I think it’s V3 iirc), So that everything’s in series, and then set up a subblade in proffieOS… makes wiring simpler at least.

you could set up that Shtok connector in V3 Mode (I think it’s V3 iirc), So that everything’s in series

Still learning, but if I understood what I read last night if the pogo LEDs are in series with the blade it prevents the use of Blade ID. Is that correct?

Correct. There needs to be an uninterrupted path to the BladeID resistor. Can’t read through pixels.
I learned that the hard way for sure.

Woo hoo! I got one right! LOL

Ah, sorry, didn’t realize you were using that, my bad!

Thanks but I did it. I checked connector pins continuity. Problem was only data pin. So I thought connectors data pin broken somehow. I was going to order another one. I opened hilt again from the connector part, realized that data cable was cut from the joint so I tested cables, no problem, wire the connector again joint the cables On the switching area. It was really really frustrating joint the cables cause there was no space.
Anyway I made my first build at last.

By the way first time I saw neopixel blade with my eyes and I thought it would be brighter. Videos and photos are perfect. I know cameras show it differently but still…
Wondering anyone else feels the same way??

What kind of battery do you have? Where is the blade from?

Battery is keeppower 3500mah 3.7v.
(You can see it in my diagram photo above)

I made the blade from KR Sabers pixel stick
with 1inch thin white blade.

As I told before when you take photo or video
It looks really nice, depends on the lighting of environment of course. But for eyes not so much.

I have not seen another pixel blades( except videos) So I can’t compare but it was so below my expectations therefore I opened the blade up, checked the pixels. (Thought maybe half of the stick was dead) it was ok.

I’ll upload links for photos later.
I’m just curious about is this a normal brightness of neopixel blade or is something wrong.

Did you check voltage at the Pogo pins? ( Carefully… Don’t short two pins with a meter probe)
It should be the same as the battery directly.

I’ll definitely do that.