I’ve been thinking it would be cool to integrate a wireless charger into a lightsaber. The coil would have to be located at the bottom of the pommel, or wrapped around the hilt in a recess.

It would require a custom set of coils and driver/receiver circuits, but could be a really fun project.

I asked about this and some said that the charge per hour would be very low. I think the calculation was twice as long. But if you could get it to 1.5 times that would be very cool.

now this has got my brain thinking…
what if you could wrap the RX coil around the chassis and have the hilt stand / holder have the TX coil embedded in it!
https://www.digikey.co.uk/en/products/detail/adafruit-industries-llc/1901/5629432
this one boasts 500mA @ 5v charging rate and is Qi compatible.
would mean you’d have to have a separate board for lithion charging but its a start.
considering how long it would be on it’s stand it would always be charged and ready to show.
would also mean no more charging port

Well, the only problem is metal absorbes the electromagnetic waves, which means the coil can’t really be inside the center of the hilt unless there is a plastic section to allow the signal to pass through.

I was thinking if you put the coil at the base of the pommel you could have a stand that stores the hilt vertically (with the pommel held in the stand, and the emitter facing up). That way the transmitter coil could be in the stand like you suggest.

That being said, maybe there is a way to wrap a small rectangular coil that could be mounted in a switch box?

While this is all a cool idea, the stand-as-a-charger idea makes me think a simple pair of pogo pins could work.
Pommel would just need 2 contact pads, preferably slightly recessed (to prevent shorting against anything while not docked) with proper plastic insulating the holes the pins go in, again to prevent shorting, this time against the metal of the hilt on the way down onto the stand/base.

The practically of your answer hurts my heart

That is a fantastic point…that’s how my earbuds charge. I saw on another forum how someone used magnets as well to make a connection. Rare earth magnets are nickel plated so they conduct.

Wireless would be cool for sure. I just spewed the first thing that came to mind.
Aside from my cordless corkscrew that recharges that way, yes, earbuds in the case was my first thought. I have 2 pogos with a magnet between them (for alignment and keeping it connected?) There’s 5v on the pogos.
But…the earbud’s exposed pads show no voltage back from its internal power cell. I wonder if there’s a reed switch that prevents backflow when they’re not docked. 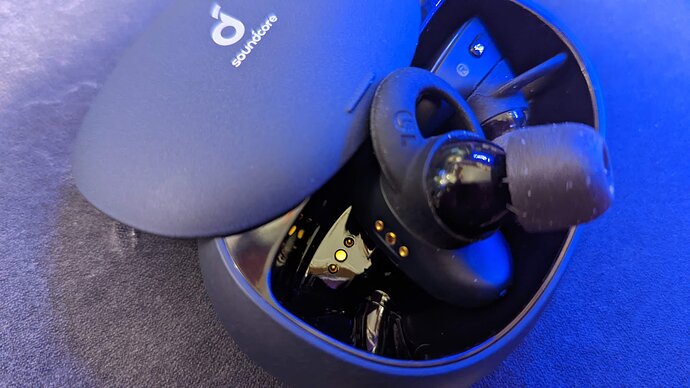 It’s probably a mosfet switch that opens the connection to the battery only if voltage is present at the charging pads. That would prevent accidentally shorting out the pads on something external.

found this on the web and thought i’d give it a go.
for the price it was a steal! 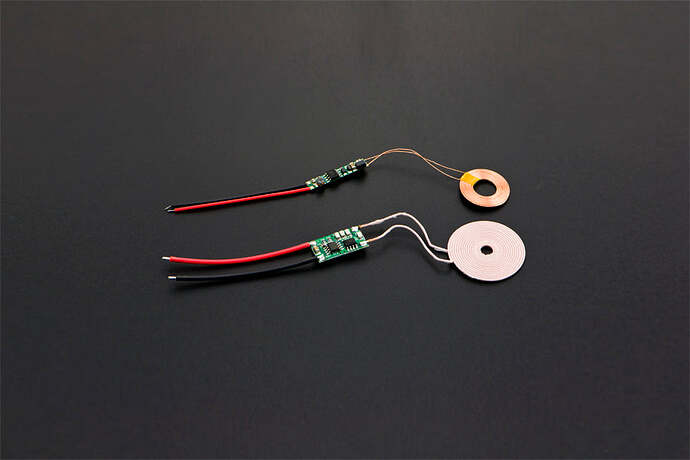 Wireless charging modules uses an electromagnetic field to transfer energy between two objects. This is usually done with a charging station. Energy is sent through an inductive coupling to an electrical device, which can then use that energy to...

taking the idea of having the TX coil in a hilt stand and the RX coil in the pommel of the saber.
the pommel could have a plastic insert where the coil sits to allow for the magnetic wavs to pass through.
i know it’s only 300mA but at least you could charge it over night and it’s ready for the next day.
no faffing, just put down on the stand!

I always thought it would be cool to make a groove in the hilt with a lathe, spool some magnet-wire into the groove, then cover it up with black paint/glue/goop.

Of course, then the charging coil would need to go around the hilt somehow…

Awesome find! I could never find one that was as small.

to be fair i did get lucky with this find.
i took to more simple approach and just typed “wireless charging diy” into google and just had a look through the shopping.

any news on this and what is the charging time?

Hot it in the post over the weekend so will toy with this a bit later in the week.
Its only to get supply voltage into the hilt so I will need to wire up a charging board to it.
I can then test it to see what I get.
My assumption will be about 7 - 10 hour charge time.

They do a wireless charging for 5v @ 1A in the PiHut but the RX coil is quite large but would cater for faster charging.

I’ll let you know how it goes

finally got round to getting this wired up to play with.
initial tests prove it works and is nice and simple to get it wired up.

bits i ordered were.
wireless charger circuit from PiHut. cost was 6 pounds not including postage.

Wireless charging modules uses an electromagnetic field to transfer energy between two objects. This is usually done with a charging station. Energy is sent through an inductive coupling to an electrical device, which can then use that energy to...

i couldn’t get a reading for current output to the battery as i think my meter was causing the charging board to not recognise there was a battery connected.
but i did get these.

to implement this you would have to have the base of the hilt made of plastic in order to get the wireless charging to work properly. otherwise you would see a significant loss in power transmission between the transmitter and receiver coils. you would also make the base of the hilt hot as it would in effect act like an induction heater. so not great.

i will at some point create a prototype and post it up.
my idea is to have a hilt stand with the transmitter coil in, so when you place the saber upon it it will charge it.

but what about the speaker? i hear you say…
well @mcarcher and myself have been working on the emitter speaker idea and have got it working rather well, so i will be adding this to the hilt.

Awesome, great work here! I would pick a few of these up, but they’re still showing out of stock.

That being said, I don’t think the hilt would heat up much if at all. The thermal mass of the hilt and low power level of the coil will probably help.

I think I want to put one of these one my next saber…it would be great when combined with my Saber Shield board, as that has a kill switch and a charging chip built in.

i’ve done some more searching to see if i could find an alternative set up, but as of yet i am to find something that would fit the bill.

both PiHut and Digi Key offer a variant that will supply 500mA or 1A @ 5v, but the receiver coil is 43mm dia, making it rather hard to fit into a hilt.

but the link to the one i an currently using from the PiHut is the only one that would fit nicely into our size requirements.

I found it in stock here: Wireless Charging Module 5V/300mA-DFRobot

EDIT: And at Mouser LOL:
https://www.mouser.com/ProductDetail/DFRobot/DFR0363?qs=lqAf%2FiVYw9ix9QZxv8j0zw%3D%3D

so todays special task was to discharge my battery and then recharge it with the wireless charging to see how long it would take. this would also give me a rough indication of charge rate.
i did this mainly because i was curious but also because the question did crop up in the thread.

i discharged the battery to 2.51v (no load) its about as low as you every want to go but let us assume you left the saber on and didn’t notice it saying “battery low”
a total of 2,304mA was discharged.

i set up the wireless charging coils but with a piece of 3mm plastic in between the coils to simulate a real world use.

Cool! So the 300 mA rated output is pretty close to the actual…also means the battery charger is relatively efficient. Mine were delivered today