Questions on blade connector design choices from a newcomer

Looking at the engineering of detachable saber blades, I see two problems people have.

One is that the blade comes loose during use and is sent flying, and we are told to “tighten the Allen screws frequently”. Now, a small number of screws with nothing but friction locking to hold them in place, with many blade attachments being compromised by just one of the screws coming loose, and with the screws only making surface contact with the blade, this all comes across to me as a genuinely bad way of securing a slippery and deformable piece of plastic in the hilt. A chuck-type clamp holder with a large contact area and some high friction coating on the inside would make a lot more sense. It could be made as simple as a rubber or silicone cylindrical bushing inside a short metal tube, with a threaded ring at one end to compress the bushing in the length-wise direction, thereby making it expand in thickness and lock the blade firmly in the metal tube. The threaded ring could have an additional locking mechanism to prevent accidental unscrewing during handling, like a quick release drill chuck. This is neither difficult nor expensive to build, and it would make accidental blade tosses a total non-issue. I have seen this kind of simple expansion-friction lock used to hold buouys to a steel wire, resisting very strong pulling forces without a sweat. An even simpler attachment would be putting an ordinary hose clamp on a rubber or silicone tube with the blade inside. Hose clamps are available in all kinds of shapes, from the traditional screw-on perforated metal bands to spring-loaded designs with a very low profile, and versions with quick one-step lock and release.

So, why the design with the constantly failing Allen screws? What am I missing?

The second problem is that pogo pin connectors are incapable of carrying the strong currents required by modern, high intensity 5V LED strips, which leads to several pins being used in parallel for the power lines. Now, pogo pins with their small points of contact and their low-friction, low-force, spring-loaded sliding contact pins are just about the worst possible choice for an almost completely stationary high current connection that just needs to handle small vibrations. A standard pin and sleeve connector with a large high-friction contact area, i.e. a simple socket and plug, can carry significantly more current, it’s a lot cheaper, and there are plenty of existing standard connectors to choose from that could do the trick, like the trusty and battle tested 3-pin “Cannon” XLR plugs. Those in particular are good enough to serve as power connectors for some electric scooters, which pull around 20A from their battery packs.

So, why the pogo pins? Again, what am I missing?

I built my own detachable blade saber with a friction locking hilt and XLR connectors, and it works absolutely great, but I’m a newbie, and I feel like I must be missing something here. Any help with understanding the reasoning behind the use of Allen screws and pogo pins would be appreciated.

Early pixel blades used an XLR connector, but the issue is the size. We’re able to make the entire connector set up have a profile of less than 10mm now, whereas XLR would probably be like, 50mm. I do wonder if something like a redesign of the SpeakON connector (basically an industrial version of the Disney blade connectors) would offer the durability and power stability needed.

The Speakon (stylized speakON) is a trademarked name for an electrical connector, originally manufactured by Neutrik, mostly used in professional audio systems for connecting loudspeakers to amplifiers. Other manufacturers make compatible products, often under the name "speaker twist connector". Speakon connectors are rated for at least 30 A RMS continuous current, higher than 1/4-inch TS phone connectors, two-pole twist lock, and XLR connectors for loudspeakers. A Speakon connector is designe...

Why pogo pins and set screws? Because it works of course.

While you are absolutely right that pogo pins and friction mounts suck, so does just about every other option in some way…

Of course set screws aren’t really just friction mounts, because they tend to bit into the polycarbonate a bit, making the friction math useless. However, if you want a different solution than set screws, you’re going to have to design it into the hilt. While that might be better, it’s going to be difficult for some hilts, and also likely increase the price of the hilt. I could see something like that being an option for duel-read hilts though.

Making your own connectors is hard, but of course it would be fantastic if someone came up with a better alternative!

Thank you for those answers! Nice to know that XLR connectors were actually used in the past. I trimmed off the housing of my XLR connectors, of course, because there is no need to secure the wires against pulling or bending from either end. It ended up stealing only 20 mm from the end of the blade, which was less than the bit that was hidden inside the hilt anyway, and about 10 mm on the hilt side, which was not a problem for my build, but I get that space is an issue both in the blade and in some hilts.

Having said that, a plug and socket type of connector can be quite shallow and still very solid if you secure it by external means and not only by its internal contact friction. Something like a spring-loaded small hemisphere placed in a matched indentation makes for much better conduction than a small rounded pin pressing against a flat PCB surface.

I guess my electrical engineering background makes me biased against using pogo pins for anything but extremely temporary connections, like a second-long testbed run, because that’s what they are designed for. But sure, if it works, fine.

I will continue to secure my own blades with a simple friction chuck mechanism, though. No tools required if I design it right, no pointy screws biting into the nice and shiny blade, and no risk for accidental detachment. With my luck, a blade coming loose in my apartment would most likely hit something fragile and expensive, or fly out the window onto someone’s head in the street below…

On hilts that could accommodate it, especially thin necks like an Kenobi, I would love to turn the emitter like a screw gun chuck to lock the blade! Sweet idea.
Adam Savage just did a lightsaber build video and he used a collet around the blade to distribute the squeeze somewhat, however it was still a set screw lock.
Some cues from the plumbing industry might be ideal, like Sharkbite connectors, or the quick connect supply line connectors. Hmmmm.

The way hosepipe connectors hold on to the tubing could be cool.

If the hilt allows for a touch of compression (like a copper neck) and you like speeder bike/ Corran Horn stuff you can use these: 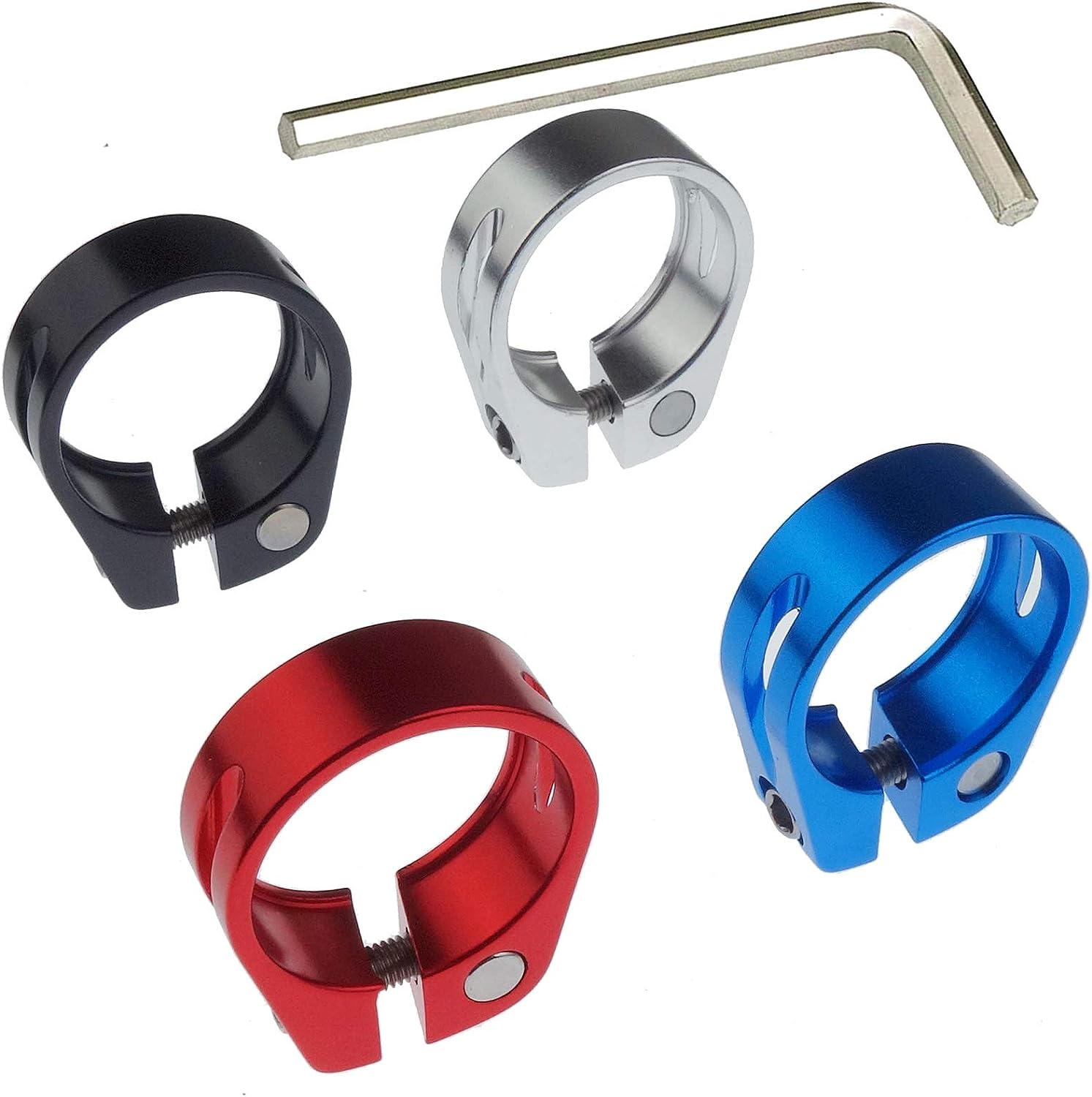 I like to pull them off of garbage scooters I find on the street (good weathering). Then I use a thin wrap of gaffer’s tape on the base of the blade you won’t see + a strip of a water bottle with the same tape on the inside for friction. The screws bite into the water bottle plastic, the tape provides a good hold, and the clamp locks it down. Duel ready.

Have you got an example?

To be fair, most professional machined sabers don’t have the loosey goosey tolerances required for all of this stuff jammed into the neck. This design came out of having to cope with the wiggle.

Will post some pics that show the technique asap. 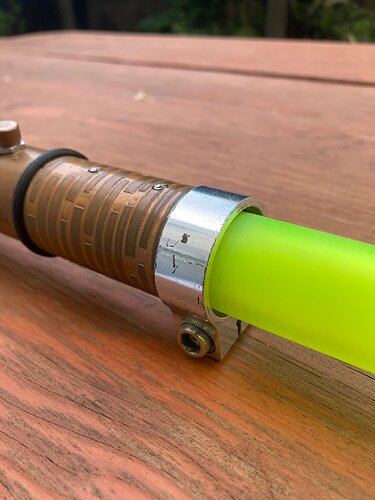 Trying this out so post maybe edited. Here’s the neck of the saber. It’s a tricree, R/B/Amber. I’ve used it for many events and such. I can hand it to a 14 year old to whack the heck out of whatever, or use it for ‘real’ sword work. 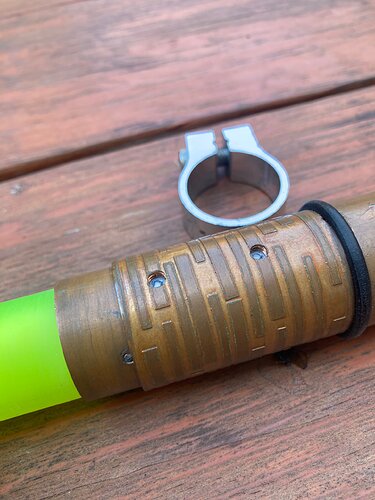 The razor scooter connector slides off. Then the screws come out. 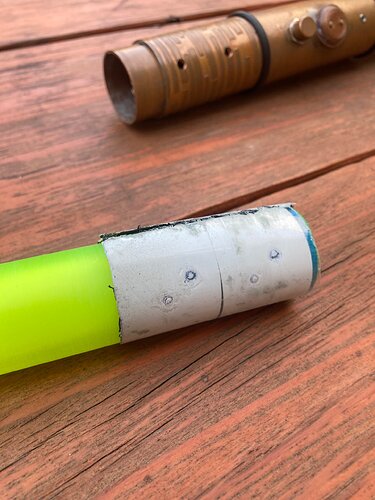 The blade is wrapped with the connector. As you can see below, the ID of the pipe had me switching out the tape on the blade to masking tape, the outside of the connector is smooth plastic (it needs to slide into place) and it’s lined with the gaffers tape. 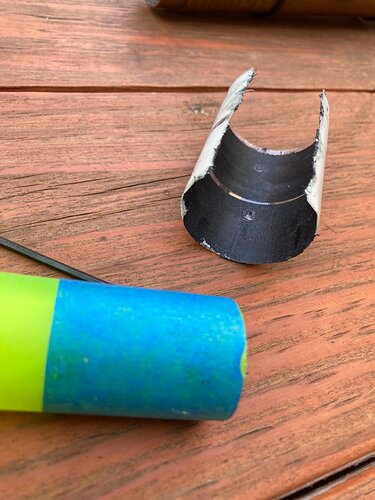 As they say, she’s got it where it counts.

With that clamp and the set screws, that blade is pretty well secured!

My goal was to get rid of the screws entirely, even the one on the clamp, but I haven’t built anything like that yet. I found some plastic clamps with a flat, low profile lock lever, but they are too flimsy. I might need to make my own metal version.

The main obstacle for me to just go ahead and make a twist chuck lock is that I lack the tools to make large diameter threads, but I’m still looking for solutions. Plumbing supplies might be an option, and I have some surplus military-grade electrical connectors with a large diameter screw-on sleeve that could possibly be repurposed.

In the meantime, a scooter clamp will do the job.

When I played Paintball we used these ones: 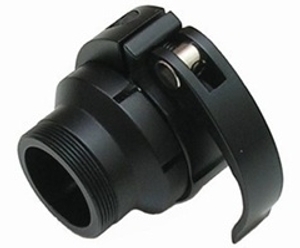 Can’t remember which ones had 1" OD.

I had a feeling there would already be something out there that was right for the task. Could you post a link to someone selling those items? My paintball experience is limited to one session with borrowed gear, and I was… ahem… somewhat tipsy at the time.

(t was a bachelor’s party, and we were all young and stupid, okay? The single rule at that time was “shoot the tiger”, and the bachelor was dressed in a bright orange tiger costume. And, of course, appropriate protective eyewear. The tiger costume never recovered, but we expected that.)

On blade retention, a couple ideas:

I think bayonet lugs and set screw is probably the best option for most applications. The trick will be finding an adhesive that really makes a good bond with the polycarbonate, or finding another clever way to secure the collar to the blade.

Nice brainstorming there. In my limited experience, glue that attaches well to polycarbonate tends not to stick to much anything else, so I will rely on friction, but a few dimples would provide extra security.
I’d say the thick wall PC blades are basically indestructible, but don’t take my word for it.

could use a fine thread for additional grip without cutting too deep into the PC. I’m working on a design along these line at the moment, and will post the results when I have them. Having some trouble getting SW to cut the bayonet lugs into the cylinder.

Design is basically an extension that goes into the blade, and has lug channels cut into it. On the hilt side there will be 1/8" or 1/16" diameter lugs or set screws or something. Once the blade is inserted and twisted, spring plunger set screws will help keep the blade from rotating. Might need to add some additional springs to the hilt/blade interface if the pogo pins aren’t strong enough. Will have to wait for parts to come in to make that call.