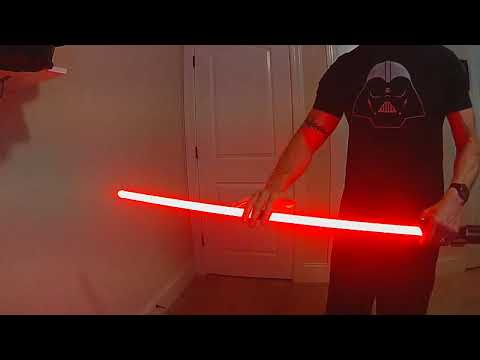 I have the initial proof of concept built out for handling a secondary blade on a staff saber like Darth Maul or the Inquisitors. If you want to run two physical blades from a single Proffieboard these new Secondary Ignition/Retraction Effects and the new Conditional Effects will allow you to gain independent control over each. To start, in your presets you will set up one blade as the Primary blade (this will work just like a single bladed saber) in the style code, then you will set up the “other” blade as a Secondary blade in the style code. This will allow you to have a separate ignition and retraction for the Secondary blade that you can control in several ways.

In addition, for this demo I have set up Conditional Effects for Blast and Clash, this allows us to choose which blade the effects appear on because we don’t want two blades showing the same effect. The Conditional Effects control which blade the effects appear on from within the style code as well. So the normal controls for each effect still run the effects and then via the style code we select which blade will show the effects. The Condition in the demo is whichever blade is pointing up, if parallel the Primary Blade shows the effect. This gives us control over how the affects appear, so blasts and clashes will always appear on the blade that is pointing up (when the effect is triggered), allowing us to switch the effect back and forth by simply changing the angle (like battling two opponents).

I am still working with Fredrik on Conditional Lockup effects, but the plan will be to also have Lockup react to a condition so the style for each blade controls which blade shows the Lockup effect. This is still in development currently.

yep, this gives some great staff options, hell I was considering making this saber a staff but because of cost of 2 boards I didn’t want to, know I can. 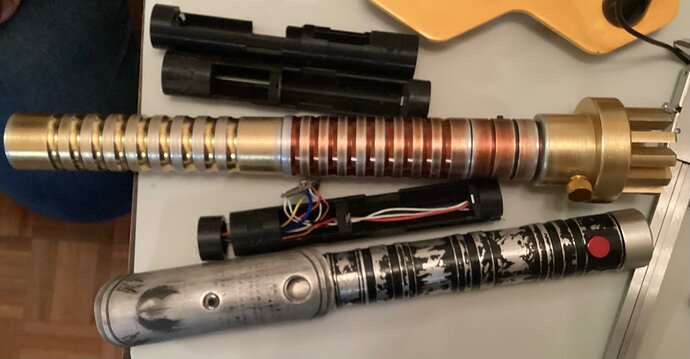 This could be cool for a Kylo Ren hilt. Could you have it where just igniting the main blade would cause it to be explosively unstable, like, spluttering, and igniting the quillons causes it to act like a normal Kylo?

Certainly, since it’s all done in the styles you could use for the quillions or other combinations as well to control individually. 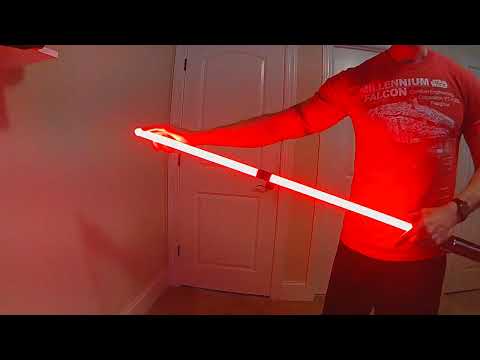 In my previous Proof of Concept I showed the Secondary Ignition and Retraction concept for Dual Bladed sabers like Darth Maul or the Inquisitor, etc. as well as the Conditional Effects for Blast and Clash. I’ve got the Conditional Lockup effect now working as well.
The idea behind the conditional effects and lockup is to allow you to control which blade shows the effect based on a “condition” like blade angle which is controlled in the style for that blade itself. This allows us to use the existing controls for all effects and then the individual blade determines if it should show the effect or not via the style itself.
For Lockup I’ve set it up so whichever blade is pointing up (if parallel the primary blade takes effect) will take on and hold the lockup effect for the duration. This allows you to use one blade to block and lockup with your opponent and continue that effect even when moving out of the “condition” like sliding down while trying to gain leverage. This produces a more realistic effect than if the lockup “moved” from one blade to the other or if both blades showed the effect. There’s still more development on these but I have the initial proof of concept running so I’m pretty excited.
Still a bunch more in the works so stay tuned!

I’m already setting up the config for my v7 to accept the second pogo pin in hilt pcb, will the wiring diagram have to change? and is it worth having a second speaker?

From a style perspective you just need the two blades to be independent. I won’t actually map controls until all of the new OS7 features are done but will most likely at least have some options for 3rd button but its too soon to say what. The rest is up to how you want to build it.