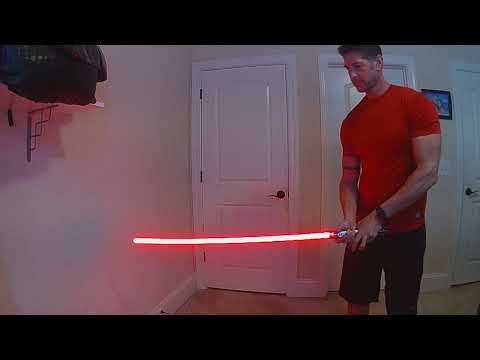 Here’s another proof of concept demo for OS7, this utilizes two new capabilities to make your saber even more interactive and bring even more realism to the experience. For those you like to have the Blaster sound separate from the Deflection sound, I’ve combined that approach with a “game” feel using two new capabilities (the naming may change as we move through development); Conditional Effects and Chained Effects.
Conditional Effects take the interactive concept from OS6 and up the ante tenfold to create effects that you can choose to engage with or not. In this application, there is now a separate Blaster sound (a new sound for your font) to represent the shot being fired. After the Blaster shot sound plays you have a very short period of time to react to the shot, if you move your saber quickly it will them deflect the bolt and you’ll here the deflection and see the effect on the blade. If you choose not to react (for example just step out of the way or dodge the bolt) there will be no deflection sound or effect on the blade. This adds to the realism as Jedi don’t have to block every incoming shot. So now you can choose how to react to the Blaster shots.
In addition, we can also not chain effects and when we combine the conditional effect with a chain we can have several effects occur based on the condition. In these examples, if you deflect it will then chain another Blaster sound and that sound will then reactivate the conditional effect for you to deflect. If you deflect it can then repeat so triggering 1 blaster shot will then let you actually generate multiple blasts without needing to keep hitting the button. In the first preset I set up the chain to a max of 3 Blaster sounds but it’s completely editable so you can have as many links in the chain as you want. In the second preset I set the chain up to be random so that I won’t actually know how many Blaster shots will be fired and I can choose to react to each as I want. This adds even more realism as you wouldn’t really know how many shots are being fired at you.
This was a very simple demo, the possibilities with these new capabilities are nearly endless as we’ll be able to build a number of conditional effects and chains into styles to make them feel more and more like fully immersive video games. No more boring button click, block, button click, block. Now you can set the style and font up so you have to really react to an unknown number of blaster shots and then deflect them or dodge them.
There’s so much more coming, this is still a teeny, tiny piece of the new capabilities so stay tuned!

This is very, very cool. thank you!