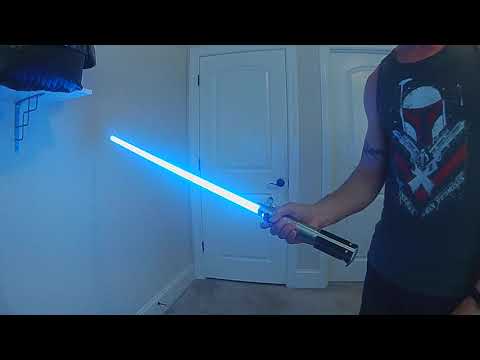 I’ve been working with Fredrik on a ton of new effect capabilities for OS7, this is a “proof of concept” for just one capability that’s actually just the tip of a “Titanic” iceberg of what will be possible.
There’s still a lot in development but OS7 is going to introduce a whole new level of interactive capabilities and integration between fonts (sounds) and styles (VFX) and while working on those I had a “crazy” idea to put some of these features together into a style-based “mini game”. I had picked up Jesse’s (KyberPhonics) “ANH Training” font a while back and it got me thinking, why not recreate Luke’s first training experience as an interactive game. Jesse helped me out by providing some additional sounds to flesh out the concept that weren’t in the original font, but the combination of some new font capabilities with the new interactive effects and functions allowed me to build a new style-based “mini game”. This game is actually just a layer in the style so it can be added to any style and modified to make it easier or harder or to have different scoring, controls and outcomes all within the style itself.

I based this one on the scene in ANH when Luke is first doing the training remote, to win you simply have to get 3 deflections before you get 3 “strikes”. To recreate having the “blast sheild down” the game is based solely on sounds. You have to differentiate the “hissing” sound from the remote moving from the “blast” sound of it firing and then react by quickly moving your saber to deflect.

The game is based on reaction time, if you’re too slow to react or don’t move the saber quickly enough after the blast sound plays you’ll hear a “grunt” and your saber will turn red to indicate a “strike”, then Obi Wan will provide some words encouragement and the remote will move again, the hissing sound is random with some short movements, some longer movements and some double movements, then once it fires you have to immediately react with a quick movement of your blade. If you react too soon or too late you’ll miss and if you get 3 strikes you “lose” (but you can try again as often as you like to get better and improve your reaction time).

If you successfully block a blast, you’ll see the deflection on the saber (like a normal blast effect) but don’t get too happy - a successful block will be followed immediately by another remote movement so you have to ready yourself to block again, if you get 3 successful blocks before your 3rd strike you’ll win and unlock a new blade style signifying a stronger connection to the Force.

This mini game itself is just an initial “proof of concept” of what’s can be done with the new capabilities, more complex games are entirely possible and each would be specifically built to line up with a specific fonts or sounds. The set up will only require a font built to match the game and the style code to run it. And the entire “mini game” concept itself is really just a tiny piece of what’s in the works for OS7. We’ll be taking fonts, styles and effects to a whole new level with what’s coming

saw this on facebook and youtubes. Reminds me of the old NEC game function, but more interactive with the saber. NEC tried this, but the thing was like simon says, and it was impossible with the motion sensor on that board.

Interesting, never used an NEC board, we could probably do a “simon says” for movement and position type control matching, it’d just be a matter of matching sounds and movements in the functions.

that’s soooo cool. the fact it has a pay off. I guess you could also do stuff like jedi training as well, as per the Star Wars Rebels training scene between Kainan Jarrus and Ezra Bridger.

Pretty much, within reason. The “mini game” is basically the style looking for a specific response or action within a period of time from a specific cue and then doing something else based on that response. Anything sound based, like this does require the font to be set up a specific way, but we can also do visual cues and responses or a mix. It would all just be set up in the style and/or font. Obviously the more complex the “game” the more involved the style code will become so there would be an eventual cap to what could be done but the pieces to create can be used in many ways to come up with a lot of unique “games”. The hard part will be thinking them up and putting the style code together to make it work.

NEC tried this, but the thing was like simon says