I think beams would have to be added.
Do you have a font that have looped beam sounds?
Any blade style should work with a blaster, but might need some modifications to work the way you want.
Not sure if it’s currently possible to have different animations for different modes, but it’s a good idea, and if it isn’t already possible, we should make that happen.
I know @NoSloppy has been working on the blaster prop, maybe he knows how to do these things already?

Beams, like Star Trek phasers kind of thing?
Maybe just a lockup on a timer? Seems like something that could be added to the font config.ini like ProffieOSBeamDuration or something, then just use that value to tell the lockup when to stop?
If it were an added sound type, we could also use WavLen in the blade style to sync the animation. Viola. Beams.
Just riffing here.

I was thinking would it be possible to just have a regular blade style like in a saber, but have everything, from pre-on to active, all take place while the button is held down, with release of the button triggering retraction, cooldown?

yes, I’m wanting to use a shtok v3 in the emitter of a phaser rifle. I’ve got the model fitted for electronics, just need to figure out the code. I will then make a font for it.

turns out a phaser font is really easy, lol. Ive got the animations i need, it’s just I click on, then click off for now. Just using standard fett263 buttons for now.

have everything, from pre-on to active, all take place while the button is held down, with release of the button triggering retraction, cooldown?

oh, that seems super simple if that’s REALLY all you want it to do.
These 2 button actions would likely suffice:

But anything else, like volume control, prev/next preset, or all the other things blasters can do like jam, reload, clipin, clipout, self-destruct etc… would either not work, or would need other button controls/modifiers if you wanted them.

Just define a latching power button, and there you go…

I have a couple buttons, I should be able to make this the trigger button, correct? like use this code for a second aux button and wire that to the trigger?

That could work, but only if it’s ok to have beams be a separate button.
It’s probably better to make it a separate mode and use the trigger button.

Thanks guys! Took me a while, but I finally got it with your help.

I ended up using AUX2, and disabled the power button from igniting the blade.

I modified fett263 buttons to do it, so it retains all functions.

ohhhh you’re not using the blaster prop file… that makes it a different story.

yeah, wanted to retain features. however, I am eyeing dual-prop as I would like to add blaster like stuff and also self-destruct.

This is like a quick little vid, i still need to do the rest of the sounds for menus and stuff.

Cant wait to get a hold of a 3.7 once they come out to get at that 2nd spi, want to see if it can handle neopixel and full video simultaneously. 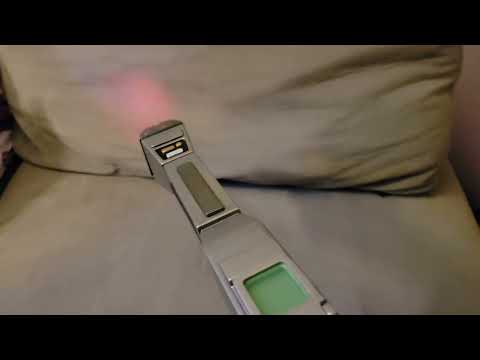 I was wondering when you were gonna post the follow-up video.

Is the green top screen going to be done up too with animations or interactive like on the Tricorder?