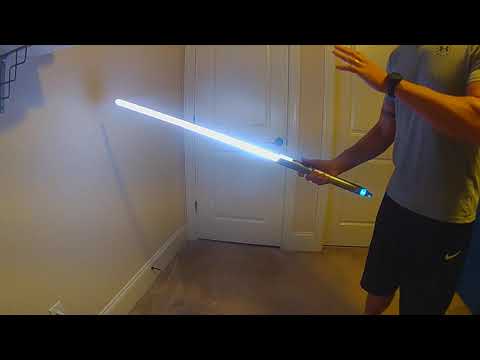 Here’s a sneak peak of the “next level” blade effects coming to ProffieOS6. Based on the personal shields in the new DUNE film I’ve built a new “hyper responsive” blade style.
ProffieOS6 introduces so many new functions and style capabilities that “responsive” doesn’t fully describe the potential. In addition, Fredrik has expanded the capabilities of the OS to further support these really complex styles allowing us to get even more detailed in the styles. Instead of 1 function like swing speed or blade angle being used to bring your styles to life, “hyper responsive” styles take into account EVERYTHING your blade is doing to bring the effects to a new stratosphere of realism. Using the movement speed, blade position, clash strength and a bunch more capabilities this style will react to everything you do with it.

The base effect is my new “Shimmer” style that utilizes the movement and angle of the blade to apply a shimmering effect. If your blade is perfectly still it will settle into a static color, but any movement will creating a rippled shimmer effect along the blade and the more you move it and the faster you move it the more intense and longer the shimmer runs.

In addition, just like the film clashes and lockups are absorbed by the blade with a Blue shield effect, but if the clash is too hard or the lockup is too long the shield is penetrated generating a Red warning. The timing, impact size and effects are based on how hard the clash is for both clash and lockup, with lighter hits you’ll get small, quick blue shimmers across your blade, but harder hits will create large red shimmers. And even if you successful block an incoming attack for a lockup you’ll want to move quickly, hits not initially hard enough to penetrate the shield can still over power it if held too long, and the strength of the hit determines how long you have to deflect, creating even more realism.

And this is still only the very tip of the “hyper responsive” iceberg and only a small glimpse into what’s going to be possible with OS6!

This is truly amazing…really incredible work!

Curious if the shimmer gets input from Marble and/or whatever you used for that gravity water blade thing you did. More curious as to what the new blade style stuff is in OS6, like how it’s used in plain english.

It’s a combo of new and old functions, in due time…