OK, so here we go!
First, thanks again @Profezzorn for another amazing adventure in this hobby.

So, out of the box, all testers should be mindful of Arduino settings.
Aside from the V3.1.0 Plug-in, we also need to change the
DOSFS: settings to SDCARD (SDIO High Speed)
Out of the box, the board was flashed with Mass Storage turned on. A freshly formatted card worked fine mounting/unmounting from the computer, and I gave it a quick run through of effects, prev, next, on, lock, while hum and smoothswings showed playing all along. A couple of taps showed clashes…so all good.

Then I uploaded a straight clone of the current GitHub master with default_proffieboard_config.h chosen, Serial only, and Optimize set to Fast. However, I did so with the existing setting: SDCARD (SPI). This caused Failed to mount SD messages. I tried Mass Storage ON, but that just caused my SD card to be in limbo not mounting anywhere, but the board reported SD busy…
TL;DR - Use DOSFS: “SDCARD (SDIO High Speed)”.

When you do, you will hopefully be treated to something like this:

Also as expected, a jam packed config and prop that compiles with 200 bytes to spare on a V2 board came in at a whopping 43% of FLASH used!
Now to start some wiring. I guess I’ll put it in a hilt with basic sound and blade, then maybe move it to a different one with OLED and accents and ?? rotary doo-dads or something else fun?
I’d welcome any guides, documented features, or some checklist items to mark off as we go along. Of course Edit Mode and all sorts of blade style functions are coming into the picture too, but as far as hardware tests, I’m all ears and will make it happen.
To the Mancave!

The beta test is really about finding the problems that users might run into.
Like this SDIO option. I can add something in the code that tells you to set it correctly which will simplify things.

Other than that, treat it like a build thread with plenty of pictures and let your imagination run free with any ways to use the new features. (USB charging, three additional pads, more memory, etc.) So, no checklist, sorry.

Is there a blinky decoder chart for the onboard LED?

Not yet.
I may also have to fiddle with it a bit to make it easier to read.

This file has the code for it:

This file has been truncated. show original

Also, it’s possible to add #define NO_STATUS_LED to the config file and then add a blade for it instead.

So C63 pads get the ceramic cap for BT, yes? 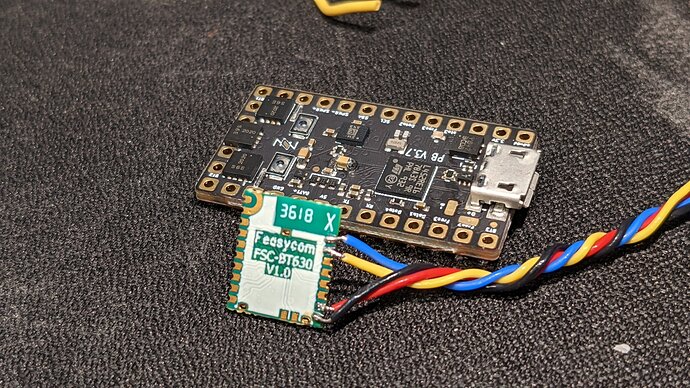 The extra space at the ends provided enough room that I didn’t have to hot air this virgin board. 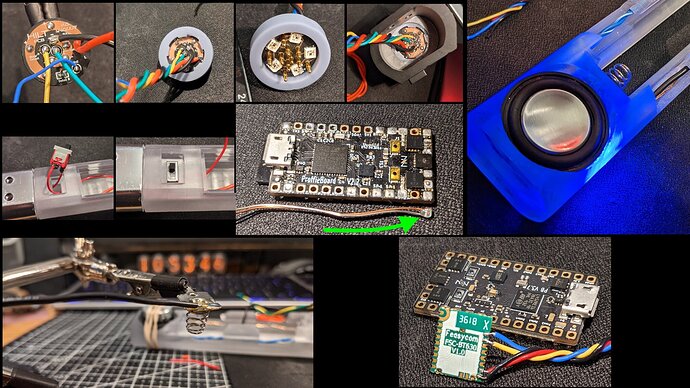 I can’t wait to get one, just for the usb charging!
I’ve liked that option on the GH3 boards but the neo blades options are not as good in my opinion.
Is the charge working through the onboard USB port, or do you have to add a seedling like GH3?

Damn my Canadian address! I’ll be joining you folks on this adventure shortly.

BT630 modules didn’t require the 47uF ceramic capacitor, only the BT909 modules had this power issue. Also why not just add that capacitor by default on the board?
Also I see that new configuration diagram shows BT909 and BT630 modules powered by SD power pad, does that mean that 0805 capacitor is between SD power and GND? Or it’s between +3.3V and GND?

BT630 modules didn’t require the 47uF ceramic capacitor, only the BT909 modules had this power issue

The manual pages 18-19 have a latching switch pictured for both, and does not say capacitor only required for BT909, so I did this.
This should still work fine though, correct?

through the onboard USB port, or do you have to add a seedling like GH3?

Direct through onboard USB port.

I didn’t add the capacitor because the board itself doesn’t need it.
Also, leaving it open means that we could use up to a 100uF capacitor if needed.

The capacitor pads are between 3.3v and GND.

If it’s between 3.3V and GND, then if wire the BT909 to “SD power” pad it may have power issues, because there is no capacitor there…

So…this is not going to shut down with IDLE_OFF_TIME then?