Hi, noob here that may have fried the Crimson Proffie v2.2 board in my saber a few hours after buying it from a buddy (it worked, but seemed to die too soon) by plugging the microUSB on the board into a smart USB charger. I’m guessing it supplied 5v/2A. The LED lit twice, a sound was played twice, and then it was unresponsive. @NoSloppy Do you accept commissioned repairs?

Have you tried reseating the battery in case it’s just the protection? Also, what happens when you plug the board into a computer.

Yes, I have removed the battery and replaced it several times. The battery will charge using the in hilt 2.1mm port.
No sound or indication of connectivity from USB port to PC.

USB chargers shouldn’t be able to kill a Proffieboard.
It should be able to handle up to 5.5v coming in on the USB port.
The ampere rating on the charger is not relevant, it just states how much current the charger can supply, it is up to the device to actually draw that much, and a proffieboard should not do that.

A bad charger could easily cause problems though.

Charger is good, I use it every day for my phone, smartwatch, etc. It’s an Anker USB-C 60w/USB-A 15w (I used a USB-A to microUSB cable)
The saber lit up the anti vandal button LED, made a sound, repeated this and then was unresponsive.
I was able to charge the battery to 4.2v in the saber with a 5v/0.7A wall charger, but the board is still unresponsive.

Which one?
(You can click on the picture to add an arrow to it while editing…)

I think the chip in the yellow box may have gotten hot, due to the deformity in the plastic near it. 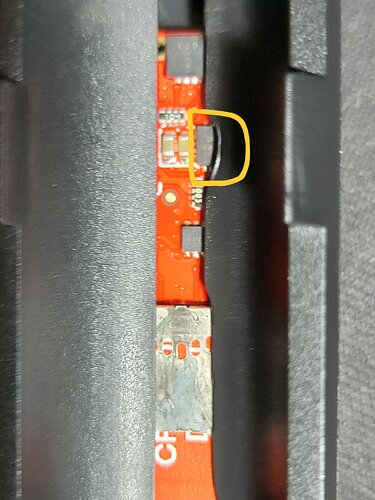 Ok, but that’s weird, because that part is the 5v booster.
The 5v booster is not powered if you only plug in USB, but leave the battery power off.
While it’s not entirely unusual for the booster to have issues, the CPU usually continues to work just fine when that happens.

Since I thought I was charging the battery via the microUSB port, the battery was in the saber. I also tried to power it on while plugged in to give me an indication that it was indeed charging.

I also cannot be certain that this wasn’t like this before I purchased the saber.

USB chargers do not always output clean and stable 5V DC. If the 5V from the charger is connected to the micro USB and a Li-Ion charger, like MCP73831, but the battery is not powering the Proffieboard, the voltage on VBUS jumping up and down from 0 to 5V causes the output of the 3.3V regulator will also go up and down. If this happens for a few minutes usually there is no damage. I think after about an hour the heat causes something to melt or burn. I believe Q7A will fail. Something else may also fail, but I am not sure. I have damaged two boards this way, but I have not had time to full figure out what failed exactly. On the two board I damaged, the output of the 3.3V regulator is now about 2V, so it will not work.

If you look at the Adafruit Feather M4 Express, which has a built in Li-Ion charger, it has a FET to connect VBAT the 3.3V regulator when VBUS is powered. I do something similar anytime I use a USB port for both data/programing and charging.

The easiest thing to do, for most people, is keep the USB port and charging port independent. Do connect them together, unless you force the battery to connect to the Proffieboard.

It was definitely only about 30 seconds or less. I got spooked when the saber LED lit up and made a sound twice. I unplugged it shortly after that.