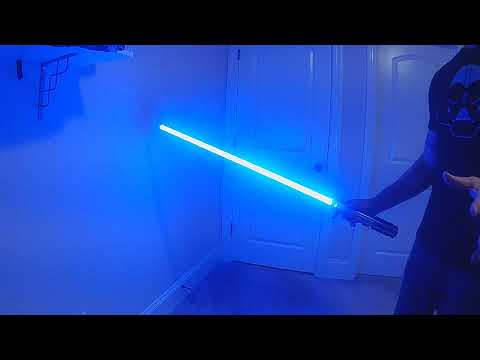 This is still a work in progress but I’ve been working on building my Rotoscope blade effects for the OS6 library.
While watching the film and trying to scrutinize the lightsaber effects I noticed that when Luke swings his saber there isn’t a noticeable animation on the blade but when he’s holding the saber still can see the distinct movement of the blade effect (although it varies at different points). This got me thinking, in the original films (before they were updated several times over) the lightsaber effects were drawn on the each cell of the film to create the effect. If you consider when the blades are swinging they wouldn’t appear on nearly as many frames as when they’re being held static it makes sense that there wouldn’t be an animation applied. I decided to take that concept and apply the hyper responsive effects in reverse, meaning when the blade is moving we’ll slow or pause the animations and when the blade is sitting still we’ll apply animations. Now this isn’t some binary function where the blade has one effect while moving and one while standing still. This effect is created through multiple functions measuring the speed and acceleration of the blade when it’s moved combined with the length of time its being held at rest to create a really organic looking blade effect.
The second half of this video does a high-level look at how the responsive effects have evolved on Proffieboard to the level we’re at today. Since OS3.9 Proffie has had the Responsive Swing capabilities, which can allow you to apply a color or effect based on the speed of the swing in real-time. These were “responsive” because the blend of the swing and base effect was directly tied to the rate of speed, so at 50% speed the swing effect would appear at 50% opacity. This is very different from a binary effect where the swing effect turns on or off based on movement. This allowed for really cool blade effects but even small amount of movement created swing effects.
In OS5 I added the “Enhanced” swing effects which would ignore the small movements of your blade but still apply the responsive swing effect once you had real swings. This allowed for a more realistic feel to the effects instead of a constantly shift blade.
Well, now in OS6 we’re jumping several levels in terms of what we can do with our effects. First, a big shout to Fredrik, as there’s a lot he’s improved in the OS that won’t get “seen” but makes all of these capabilities work even better than before. He greatly improved the motion code for OS6 so that we’re getting more motion measurements, more often, making the “real-time” motion functions even more responsive. At the same time he’s been making more and more improvements and optimizations to the memory usage so we can do more and more calculations with all of the new motion information from that motion code. All of those improvements mean we can layer more and more motion information into our blade effects and get even better performance out of them.
So in OS6 we can now apply multiple functions for movement; speed, acceleration, blade angle, twist angle, clash impact and a host of “helper” functions in combination with each other to create effects that respond to everything you’re doing with your saber in real-time.
In the demos of the hyper responsive capabilities we’re able to use the speed and acceleration of the swing together to not only apply a swing effect but also affect how long it takes the blade to recover from it based on how much “inertia” was applied to the blade to generate the effect. This translates to slower movements creating an effect that only appears a short time after the movement has ended and really quick movements creating fast, brighter and longer effects. And we’re not limited to applying the “inertia” to just one aspect of the blade effect. And there’s no limit to the functions you can apply. You can have the “inertia” apply to the movement of effects, the speed and intensity of those effects as well as the color and duration of the effects.
In the “bump” demos I created a blue bump who’s speed up the blade is based on speed and acceleration of the movement of the blade and the time it takes the bump to slow is also a function of speed and acceleration so the more “inertia” you apply to the effect the longer it takes to slow itself back down.
And in the second bump demo I took the speed and acceleration functions and applied them to not only the motion, speed and duration of the bump but also the color, with Red being a nearly “stopped” effect, yellow being a slowing effect and green being a full speed. So as I swing and accelerate the blade the speed, movement and color will go from Red to Yellow to Green in real-time and the duration of the effects will grow as well.
And this is just one example of the possibilities; the realism, responsiveness and interactivity with your sabers so much more advanced.
This is only the beginning, so much more to come…

Is the color changing blade based on speed of the swing something that I can configure in the style editor? Or is that a future development? If it is available now, what would I need to do to make it active? When try using the Hyper Responsive Rotoscope style I can only edit the base color. There is no option to adjust the color it swings to. Thanks for the help!

Which color are you referring to exactly, the demo styles were put together to show the capabilities. You can build using either SwingSpeed or SwingAcceleration functions or both if you want using the Beta Editor.

Thank you! I figured it out using the style editor. I was referring to creating a blade that gradually transitions from purple to orange, on a hard swing, then gradually back to purple when the blade has stopped moving.

I had never used the style editor before so I had to play around with it to figure it out. I have loved using the style library though! Making a quick version of a blade style on there has been great, then just using the editor for minor tweaks.

Im not sure how the hyper responsive rotoscope is setup internally, but I think it would be cool to add an “alternate color” option in the style library that would have the ability to change the animation color of the rotoscope if desired.

Either way though, I got it figured out and was able to build the exact blade I was looking for!