Lightsaber is all wired up…LED’s light up in the blade and working fine…until I tap the blade to make it clash for the blade. Once I tap it the whole thing shuts down and I have to remove the positive lead and re-attach it to make it work again. Without the blade attached everything works fine…all the sounds work for clash etc. Once the blade is wired in it works but again…when I tap it to clash it shuts everything down. Here is my wiring schematics … 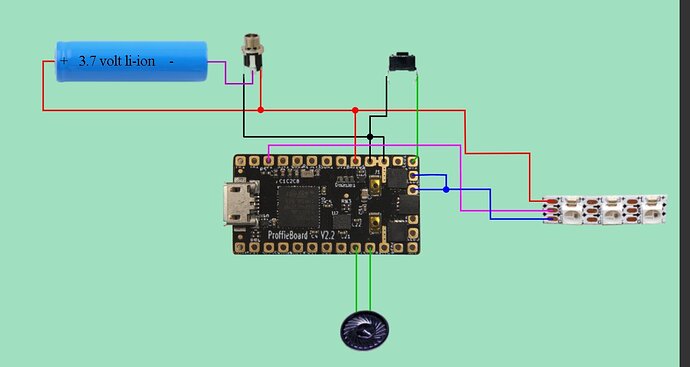 battery tripping, which battery you using? Not the right one is my guess.

Hah, that was going to be my reply. Likely either underspecced wire and/or low drain battery.

Try it without a blade. If it works fine, then it’s clear that the sudden current to display the clash brightness is too much for the power circuit.
Get a battery with 15A max and it won’t happen.

Yes, the battery may have worn down, or the protection circuit might be broken. From your description, it’s nearly certain that the problem is the battery, so you should try replacing it.

*Tried a different blade yet?

If nothing more than to rule out a short in the blade.

A short in the blade would normally trigger the battery cutoff circuit as soon as you ignite the blade, not when a clash occurs.

I get that, let me clarify. Yes, but only if the short is “active”, not if the short is an intermittent result of an impact causing something to barely move or touch. I’m thinking in terms of a wire that’s barely loose or in this case, a single wire strand that is sticking out, like say at the blade bottom pcb or where the wires meet the strip, to where it could just touch enough to trigger the short when the blade is clashed. OP mentions “until I tap the blade to make it clash for the blade” which to me indicated a possible point of contact shorting out since the clash is not being triggered via Serial Monitor but by a physical hit instead.

That is indeed entirely possible, but if so, the short would only happen on some clashes.
If the problem seems to occur on every clash, then it’s more likely that the battery is problem.

@profezzorn thanks and yes since this does give @Gary_Graves some better direction to go in to see if it’s something simple or deeper.

At this point, Im really curious to see which battery isnt posted in this thread…