How come the SMD 47uF cap between 3.3 and GND for bluetooth

Im going to add a bluetooth board to my Proffie 2.2 and I am interested as to why the 47uF cap is being put in a place that feels to me like I am shorting power and GND…

It’s not a short, because capacitors don’t carry current.
To be more precise; capacitors don’t carry DC current, only AC.
They act like little batteries which discharge when the voltage goes down and charge up when it isn’t. This makes it a filter which makes the power supply more stable. When the BT chip turns on, it uses a fair amount of power, enough that it can cause problems for any of the other components that use the 3.3v power. Adding the capacitor there helps deal with the temporary power draw.

It’s like the coolant reservoir in your car. Coolant is drawn in on an as-need basis to keep the system full in times of lower pressure / temperature.
This does that with power to compensate for the sudden draw the BT chip pulls at power on.
EDIT oh, I left this in edit mode too long.

Waiting in the meantime for the SMD cap, but I have wired up the 630 BT module and its awesome! 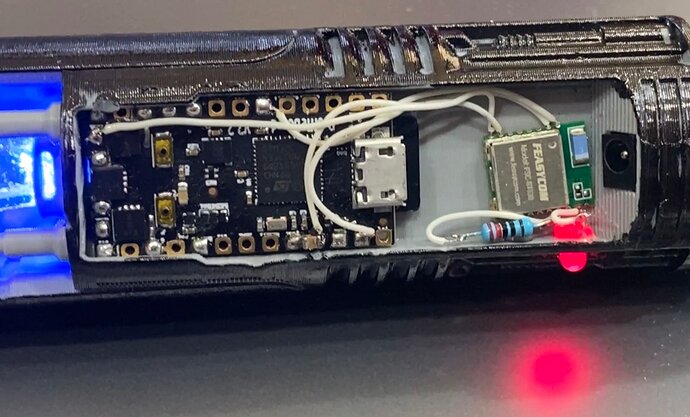 Thank you for all the help.

The reason I added 47uF cap there is that I had issues with Proffieboard freeze and not boot if wire the BT909 module because it drains quite a lot of current at powering and connecting. Adding the capacitor was a suggestion by Fredrik and it solves the issue. This shouldn’t be an issue with the BT630 module though.