I was rummaging through my pile of potentially useful random items, also known as “junk”, and found this little trinket scavenged from an old xenon flash beacon.

It’s not formally a diffuser, because it doesn’t scatter any light, but it refracts light in a manner that is very similar to a diffuser. When you are not looking at it up close, the effect is very similar to that of a milky white tube, with one big difference: it doesn’t absorb any light (well, not much, anyway). This improves the intensity and reduces the heat generation, both of which would be desirable for a light saber blade. 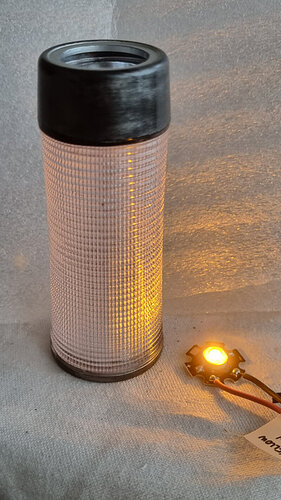 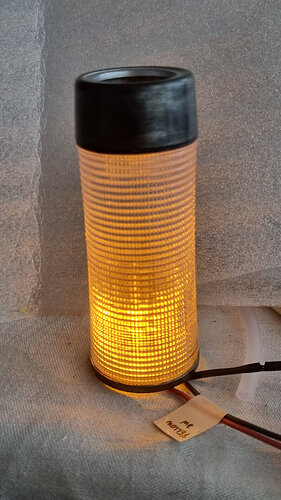 It’s a plastic cylinder with deep horizontal grooves on one side and vertical on the other, causing a Fresnel refraction along both axes to mess up the angle of the exitant light and make it seem like it was coming from an extended region rather than a small point. Something like this would be great for a high intensity blade. More light throughput, less bulky, and less of a thermos flask than PE foam. Does anyone know of a source for large enough plastic tubes or sheets with this structure? I could make my own from a smooth tube, but it would be messy and cumbersome. And it would probably look “home made”, which is not the style I want…

Unfortunately, I think finding tubes with structure is hard, and/or expensive.
I’m guessing that this little thing was injection molded, while tubes tends to be extruded. You could put grooves going one way on extruded plastic, but it would be difficult to put groves going around the tube.

However, this does remind me of an idea I had a while ago but never followed through on… LCD screens has a plastic sheet in them designed to smooth out the light. It has a similar, but much finer structure to this tube. My idea was to harvest one of these from an old TV, roll it up and stick it in a blade to see what happens.

If you need to make it yourself, use a knurdler? (and maybe warm it or the tube up?)

This may be a neat idea for a display only piece it’s impractical for actual use. At some point stress-risers come into play and people will be kids and do allow blades to hit things.

Speaking of stress risers, I was not planning on putting this pattern on the main enclosure for the blade, but on a thin and flexible inner tube, or possibly outer tube if more distance is needed between the core and the refractor. I was thinking a polyurethane hose, or even some cheap, soft PVC tubing. Neither would break from bending. As for the grooves going in two directions, both could be diagonal for better structural strength and easier fabrication. Perhaps both sets of grooves could be made in the same surface, like a knurl pattern, as suggested. Knurling a soft plastic tube with a metal roller and some heat should not be a huge problem. I imagine a gear with suitable spiral cogs to make the knurling roller could be scavenged from some gearbox. I might even have one somewhere.

Looking for less DIY-heavy solutions, there are polycarbonate sheets with a “diamond” (rhombic) embossing pattern to them, mostly regular but also some irregular, seemingly meant for making covers for light sources. Those have a different kind of refraction, with most of the light being deflected by a certain angle, but it might still be enough. A plastic shower wall is another possible option, if I can find one that can be rolled into a thin enough tube. I’m also looking for some strongly refracting adhesive window film of the refractive kind rather than the diffusing kind, but I have come up short. The brands I have found are not bending the light nearly enough.
The LCD screen diffuser film is an interesting option. Big screen LCD TVs are starting to hit the scrap heaps, although the ones that are most commonly found in dumpsters and flea markets right now are still of the kind with fluorescent backlights. The diffusers on those are of a different kind, and not suitable for this particular purpose.
Pity that the only source for that film seems to be from a discarded TV screen of just the right age. More modern screens are now OLED, which has no backlight.

Isn’t there some transparent holiday wrap (cellophane) with diffused squares/circles? Do like the original diffusion was, rolled up sheet. *Trying to find an image of what I mean without dating my age. What I used to see as a kid where as the Christmas Tree lights reflected they would become a rainbow or just diffuse across the surface in a neat pattern. Basically this but it was almost clear and also came in diamond and square shapes. 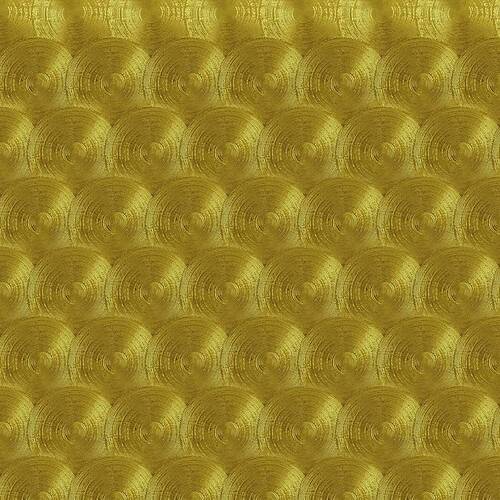 I think I know what you mean, and I don’t think that kind of material bends the light enough. Several layers could help, but that “almost clear” property will steal more light with each layer that is added.
I’m going on a hunt for an old LED-backlit TV today, but their design is all about light uniformity, and the diffuser can have a light throughput as low as 40-50%, which is only on par with a milky white diffuser. We’ll see once I crack one open. It might be a while before I find one – we’ll see.

The fresnel diffuser is an interesting idea. Im building my first saber and was going to experiment with a resin printed diffuser. Putting grooves in the print could be a good way to move the light around.

It seems to me that any clear plastic can work as a light guide, and creating “grooves” can be done with sandpaper…

I have a couple of old TVs. At least one of them is unfixable, so I really should try to harvest the diffuser from it.

Here in seattle they have a place called RE-PC which recycles all sort of old electronics (for a fee). They also let you buy things for parts, but I don’t know if they would let me go take TVs apart and just take the diffusers…

The grooves created by sand paper have fundamentally different optical properties from macroscopic deep grooves. They are not optically smooth but somewhat rough, they are very narrow, rather shallow even in relation to their small width, and rather strongly random in terms of width and depth. A sanded surface is statistically similar to a weak diffuser, which is not what we want in this case.

I made some experiments with optic fibers of the dirt cheap kind, millimeter-thin naked strands of extruded acrylic, and one layer of such fibers placed side by side has an effect similar to one parallel set of deep grooves. Such optic fiber can be bought very cheaply from Chinese mail order companies, and I’m thinking of trying two spiralling layers of fibers inside a clear PC tube, with one layer winding left and one winding right. With 22 mm inner diameter for a 1" blade, it would be about 100 strands of 1 mm fiber for two layers, at about 1.3 m length each for a 90 cm blade because of the 45 degree angle of the spiral path. Wrapping 150 m of 1 mm fiber inside a tube would not be an unreasonable amount of work, and I can scavenge the fiber from a bundle of 50x5m strands I have available. I might try that.

A sanded surface is statistically similar to a weak diffuser, which is not what we want in this case.

There are two differences though:

Absolutely. My point was that sanding alone does not really do the trick to diffuse an LED strip. A tube sanded both on the inside and the outside comes closer to a multiple scattering volumetric diffuser, but it also starts losing light to absorption of some multiple internal reflections and backscattered rays.

Speaking of making in-hilt illumination more uniform, the reason I bought that optic fiber bundle was to try to build a uniform intensity base-lit blade. Sanding the fibers just right, perhaps just making small sanded nicks with unequal and carefully determined spacing, could make the fibers leak their light less at the base and more towards the tip, to the point of being uniformly bright along their entire length. Cutting the fibers of a bundle to distribute the fiber tips uniformly across the length of the blade is much simpler, but that would create a small amount of high intensity spots and require plenty of diffusion.

I put the base-lit experiments on hold for now, but I haven’t abandoned those plans.