I’m in the process of slowly making a liquid cooled high intensity saber, one that has 100W power or so in total, with the cooling liquid flowing in the interior of the blade and making direct contact with the LEDs. In the design process, I have toyed with the idea of making the coolant slightly milky to diffuse the light. The diffusive power of the liquid could be easily tweaked to blur out the bright spots just right without stealing too much light.

Then, today, it occured to me that a fluorescent coolant might be even better. I did a quick experiment with a few grains of the “king of flourescent dyes”, rhodamine 6G, which I solved in a methanol/ethanol mix used as fuel for certain kinds of camping stoves and heaters. (Sadly, water will not do as a solvent, because it destroys the fluorescent property of the dye.) 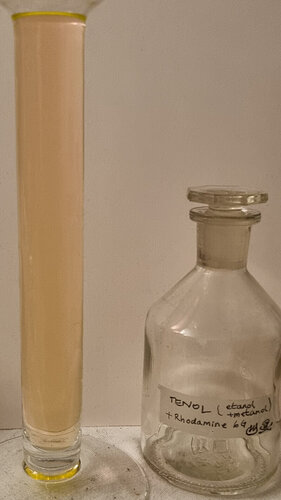 The glass tube is around 1" in diameter. In the second image I used a green laser pointer to excite the fluorescent dye. It absorbs the green light and re-emits it as a greenish yellow. With the extremely low concentration of dye I used here, the green ray can be traced as it scatters to yellow and drops exponentially in intensity across a distance of a few inches. More dye would make more light scatter close to the emitter and shorten the dropoff distance. There should be a sweet spot for concentration to diffuse the light just enough.

The dye can be optically “pumped” with other wavelengths than green, including light from blue or even UV LEDs. Using UV would make the LEDs as such more or less invisible – all the visible intensity would be seen emanating from the liquid, and the blade could be made quite close to a perfect diffuse emitter.

Now, this will take some more experimentation to figure out properly, but I am definitely going to pursue the idea further. The chemicals were delightfully cheap, and the quantum efficiency of rhodamine 6G is excellent. Pumping with UV would still lose some energy because the emitted photons have longer wavelength and lower energy than those that are absorbed, but green light is very efficiently converted to greenish yellow light.

A third image to better show the fluorescent effect. Laser enters from the left, showing a slight reflection from the glass surface, passes through the liquid spawning off fluorescent light of a more yellowish color, and exits with much reduced intensity to the right, making a weak green spot of the original green color on the background in the upper right corner.

Usually blue LEDs are good for this. Blue LEDs are very efficient, and the fluorescent dye can absorb a bunch of frequencies that the eye aren’t very sensitive to and re-emit them as bright green light.

Yes, blue is the standard choice, and it’s what white LEDs have beneath the fluorescent material, but this fluorescence in the coolant happens in a volume that’s not terribly well suited for the purpose. White LED chips have their fluorescent dye in a thin layer to minimize the amount of multiple fluorescence events. Fluorescent dyes have quite a bit of absorption in their own emission band, and multiple absorption-emission events will increase the energy loss. A good quantum efficiency of, say, 95% as quoted for rhodamine 6G, is for each event, and a long chain of them will lose energy exponentially with each step.

So, for maximum intensity, we want most of the light that escapes to the outside to be from one of the first few emission events, but that means we want a fairly weak absorption, and some of the original LED light will shine through as well. If that is green, it makes the direct view of the chip more similar to the rest of the light. A blue LED will be a markedly different color than the fluorescence, and could stand out more clearly as a bright spot in the mist.

But, like I said, this will take more experiments before I have it figured out. I will try reducing the math to 2D by shining various LEDs from the edge into a thin layer of liquid between two sheets of transparent acrylic.

(Flashback to my PhD work on multiple scattering. Really didn’t expect that to apply here…)

Wonder if you could create cool effects by varying the amount of dye over time?

Perhaps a power-up animation of a UV version by starting out empty and filling up the tube.
Lots of fun things to try here. Pity the liquid has to be alcohol, though. It’s messy, smelly and flammable when it leaks and spills, and both will happen, at least while I try things out.
Time to don that evil scientist lab coat which I have somewhere. And from my initial experiments with high power LEDs and this fluorescent dye, I realize I will need welding goggles as well.

Muhahaha! And they said I was crazy! I will show them!

How about glycerine? Although it might be a bit thick…
I bet Flourinert coud work, but I think it’s expensive.

I should try glycerine, it’s a great idea if it works, i.e. if it doesn’t hamper the fluorescence property of rhodamine like water does. The high viscosity is a problem when trying to pump glycerine through a thin hose, but I don’t need a high flow, so I probably just need to use a better pump with some pushing power instead of a flimsy impeller.

At several hundred $ per liter, Fluorinert is definitely outside the budget range here. Also, it’s a fluorocarbon, and the environmentalist in me would hate to use the stuff for a hobby project. I had qualms even buying rhodamine, because it’s very toxic to water living organisms, but with the extremely small amounts I will need I considered a few accidental spills to be acceptable.

Good news: with the low concentration of rhodamine 6G that is needed for this application, with a mean free path length of several millimeters or more, water works fine as a solvent. I found some recent references for this and verified it with experiments. Alcohol is required for maximum efficiency at higher concentrations, or to solve extremely high amounts of dye in liquid. Either becomes relevant only when building dye lasers, but I’m just making glowy things.

I just realized that water needs some nasty stuff in it to prevent the growth of… other nasty stuff… in the liquid. I might end up using alcohol anyway, or a water-alcohol mix.

Someone on the Internet reported success using vodka as the solvent in a rhodamine dye laser, and an even further diluted water-ethanol mix would still prevent the growth of bacteria and algae, while also being non-flammable, more or less non-toxic (or at least non-lethal unless you consume large amounts of it) and work considerably better as a coolant than pure alcohol.

This is at least a very well-trodden path. Everybody who has ever built a water-cooled PC knows that you need water wetter, metal protector and some pool treatment stuff in the water, and of course, you’ll want to use distilled water to avoid salt deposits. There is a variety of things you can buy, usually intended for cars or hot tubs that can be used.

Even with all that stuff, you eventually get film and gunk in your water cooling system and it has to be washed out after some time. I’m not sure if there is a way to avoid that, regardless of what liquid you choose. Even refrigerators eventually die because the coolant becomes polluted.

I think an easy way to flush and replace the coolant is going to help you more than alcohol.

Wait, won’t the rhodamine stop anything from growing in the water?

Rhodamine is poisonous to water-living organisms, true, but the rather weakly fluoresecent solution I am going to need here doesn’t contain enough of it to kill off algae and germs. The dye is really amazingly strong - you need less than a milligram per liter, i.e. not even 1 PPM. Only some particularly sensitive protozoa might find that low concentration inhospitable.

Ufortunately, any oxidizing agent in the water (i.e. pool cleaning stuff) will react with the dye and destroy it over time, and tensides (wetters) are problematic in that they tend to attach to the dye molecules and prevent them from doing their magic. Hence, I can’t use CPU water cooling additives straight off. I might find something useful in that field, but I really think water with ~20% ethanol and/or methanol in it is the simple solution - it’s enough to kill off even the most hardy species of yeast.

My plan is to replace the coolant tank with each battery change, to eliminate the need for a large heat sink. Flushing the system now and then, and remembering to store it empty, will not really be much of an extra hassle.

Now, if only those green LEDs would arrive from China so I can continue with the build…