Discussion: Unusual blade types, how they work, and how to construct them. Flat blades, hybrid (metal and light) blades, etc

Hi everyone!
So, we’ve all seen the polycarbonate tubes for standard simple “beam of light” sabers, but what about the non-standards? Things like the Darksaber for example, or certain weapons from other media that are similar to lightsabers, but have different blade shapes?

From the little bit of browsing around I’ve done, acrylic seems to be a popular choice for making flat blades, such as seen in the darksaber. From what I’ve heard though, acrylic has a reputation for being fragile and not suitable for much other than display pieces.

How about hybrid blades then?
You may be wondering what exactly I’m talking about when I say “hybrid blade”. Well, I’m sure there are other examples out there too, but the first that come to my mind are a few of the weapons from Starbound, particularly the Solus Katana, and the Protector’s Broadsword.

These weapons have metal blades, and can function as a traditional sword when not powered, but the blade can also be energized to create a lightsaber-like weapon.

I’ve seen a few hybrid-like blades around, but the ones I’ve found are all basically just regular acrylic blades that have metallic paint over large portions of them, which masks the light and only allows light to show through in specific spots that are unpainted, such as the blade edge or patterns adorning the blade. But as for hybrid blades that have a fully metallic appearance when off, but still have full glow when on, I’ve found nothing so far.

I think I just might have an idea for how to create the look of a hybrid blade though! As of now, this idea is untested, but I’ll soon have the materials on hand to try it out.

So, my plan is to construct it similarly to how a LARP sword would be constructed. Start with a suitable core, such as a 1/2" thick fiberglass rod (I myself intend to use square rod), and run LED or Neopixel strips down the sides. Then sandwich the core between layers of a translucent foam, such as plastazote, with a channel cut out in the middle layer for the core to fit nice and neatly into. Glue the layers together with a clear adhesive, and then cut the slab into the desired blade shape.
Once the shape of the blade is formed, spray it with clear Plasti Dip, enough to fully coat it and keep the foam protected, and have the final product not be excessively squishy. Then top coat it with a layer or two of Plasti Dip Metallizer. Since the metallizer is in a translucent base, it should in theory allow light to travel through it mostly unrestricted. Heck, the metal flakes in it might even help with further diffusing the light, assuming it’s not applied too thickly. If this works as I envision it, then the blade should end up with a bright metallic appearance when it’s powered off, and still be able to let plenty of light through.

Interesting thought. I’ve thought about non-cylindrical blades a little bit, and something I’d like to try is to take a pc tube and thermoform it by drawing or pushing it through a heated die to give it an elliptical crossection. In theory, any shape you want can be made from pc if you are willing to shell out the money to build the equipment.

As for metallic and glowwy hybrid, it’s a difficult problem. Something that might work is to have a very loose knit layer of fabric that you dye grey and then add some kind of glitter or metallic flake to. Without light behind it, and from a distance, the individual holes wouldn’t be distinguishable, and it would just be grey. When you put light behind it though, it would shine through. Would be very difficult to pull off though, but same basic idea as what you’re suggesting I think. It will be interesting to see if your idea works.

Here’s another crazy idea for flatblades and hybrid blades. Nylon!
Just for fun, I tried tucking some cheap LED strip behind the fuller of a nylon sparring longsword. This was the result! 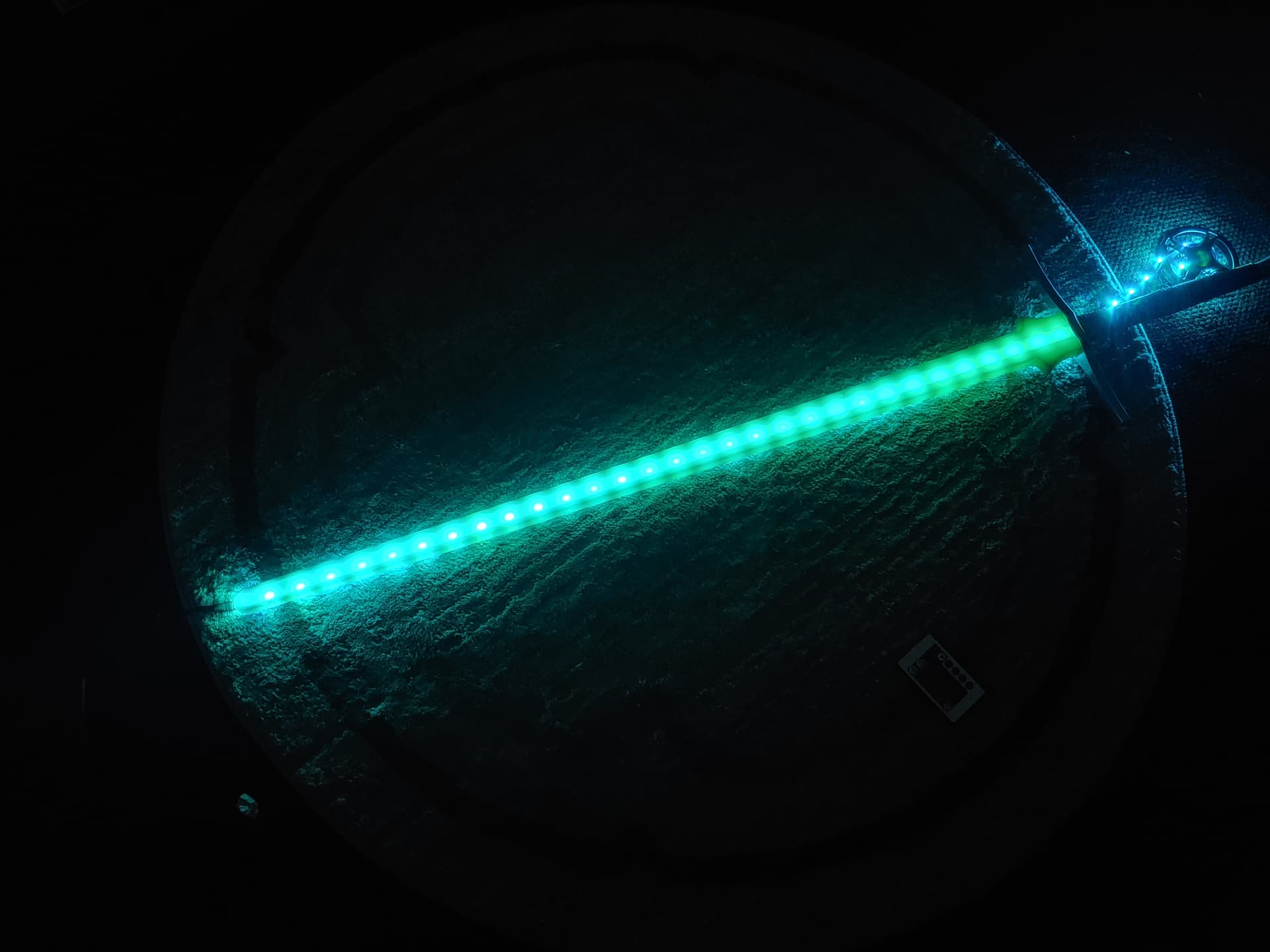 And this was just with a cheap strip with a density of about 30 LEDs per meter. A denser strip would probably be capable of providing a more consistent lighting throughout the blade.

If instead of a fullered blade, a hollowed out blade could be made of nylon, a pair of LED strips could be inserted back-to-back into the center.

Of course unlike acrylic, a nylon blade would have a fully solid appearance, and wouldn’t be capable of having areas of transparency like an acrylic blade would. But an upside to nylon too would be that it would be duel worthy, unlike acrylic.

Nylon is available in reasonably transmissive variants, meaning not too milky to let enough light through. I have used 1 cm thick nylon for stage prop swords that could handle a lot of heavy dueling. (They were also heavy enough to cause bruises, so beware.) Polycarbonate is strong, and completely transparent, but thick sheets of PC are terribly expensive. You might be lucky and find PC sheets as scrap, like I did. Mine were from a discarded display stand in a department store. Hockey rinks have lots of PC to protect bystanders from being hit by a puck, and bank tellers and other bullet-proof service points can have thick PC windows. None of those are high volume or high turnover products, but like I said, you might get lucky.

Metal flake paint is slightly translucent if you apply it in a thin enough layer, but it would be difficult to apply it evenly across the surface. Also, it doesn’t really let much light through. I would suggest trying some shiny reflective film instead. Some kinds of sun-protection film for windows could work, or the plastic that is used for anti-static bags for electronic components, if you can find a large enough sheet of it. Both look like mirror-shine polished metal, and both let quite a lot of light through.

Huh, I did NOT know that about anti-static bags, and I just happened to have one handy, so I tried putting a roll of LED strip in there, and sure enough, it works amazingly! Thanks for the idea!

I’m going to be building the foam blade first before I try a nylon blade. Since it’ll be soft, using anti-static sheet to cover it might not be a good idea in that case. It’d probably be too prone to creasing, so I’m going to try the clear Plasti Dip and metallizer first, but I should still have enough material leftover, so I just might bite the bullet and try covering a second foam blade with anti-static just to see what happens.
Once I get around to the nylon blade build, the anti-static ought to be perfect! The hardest part will probably be just getting a tight wrap all around while minimizing seams.

And yes, nylon blades are pretty common in HEMA training weapons too. That’s exactly what that sword is that I tested my LEDs against. So yeah, it’s got plenty of durability, has seen plenty of high contact combat, and I’ve also been whacked plenty of times with similar ones.

It’s tough stuff, but I’d actually say getting hit with a wood sword is even worse. Nylon at least has a bit of flex to absorb some of the shock.