At the moment, this is just an idea, but I’m planning to build it, and I’m waiting for material to arrive by mail.

I want a saber that is painfully bright to look at. Ideally, it should have enough power to look bright even in full daylight.
Also, the “dark core” effect would be cool.
This build will try to combine the two for mutual benefit.

I want to cram as many as I can of these 3W LEDs into a blade: 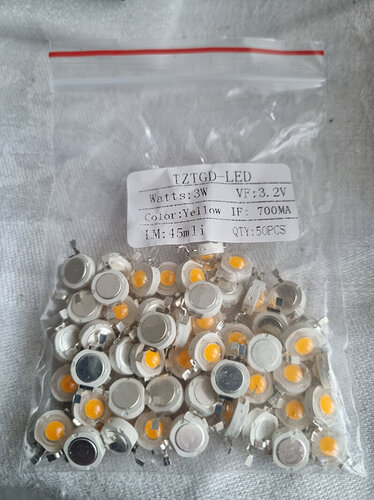 For this to work, I need heatsinks for the LEDs in the form of a chunk of aluminium for each to sit on, and I also need active cooling because they are all sealed in a narrow tube. This sketch outlines what I have in mind: 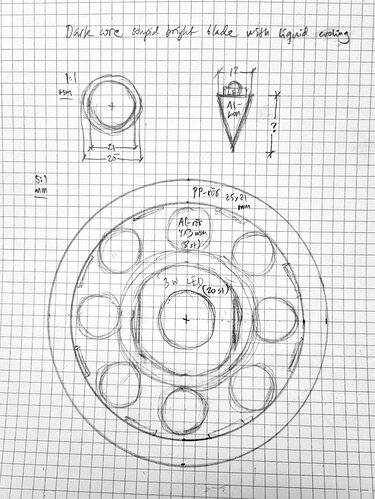 The blade tube is transparent, with LED chips mounted in a stack, with a cage of 8 4mm aluminium pipes around them. Between these pipes, on the inner wall of the blade tube, are reflective strips (drawn but not marked in the sketch) to block all direct views of the LED at the centre from the outside. The light that escapes is reflected from the inner face of the narrow pipes and escapes only (well, mainly) at glancing angles. This will create a “dark core” effect, hopefully, where the blade has a dark centre with a bright corona around it. Each LED is mounted on the flat base of a short circular cone of solid aluminium, for heatsinking and for making the light from the adjacent LED that would hit the chip from below be reflected outwards. I think the profile of that cone can be designed to get a recently uniform intensity along the blade for a certain spacing of the LEDs. I’m thinking one LED per inch or thereabouts, which makes the uniformity less of an issue.

The pipes carry a cooling medium (air, or, if thermal issues become severe, water) to the top of the blade, and also serve as conductors for the power, allowing for a segmented blade with seven sections without adding any wires. A 4mm aluminium tube can carry a lot of current. If air cooling is enough, the hilt can just act as a blow dryer and expel the hot air. Should liquid cooling be required, which I hope it won’t, it will be a challenge to fit the heat exchange radiator in the hilt along with the circulation pump and the power source. I hope air cooling will suffice.

The design limits here will be thermal management (cooling dozens of 3W LED chips enclosed in a tight space) and power (with 1 LED per inch, a full blade will consume almost 100W). There are Li-Po power packs for RC purposes that will fit in a standard hilt and would last for 10-20 minutes at full power. In normal circumstances, I expect the blade can be run at reduced power and still be stupid bright.

I will post updates here once the material arrives and I can build prototypes. If you don’t hear from me, it means real life interfered with my play time and I haven’t found the time to build anything yet. I will post any results, even reports of miserable failure. Because science.

This sounds like a fun blade, but it also sounds like it’s going to be very heavy.
I don’t think you’re going to see much of a darkblade effect though.

Maybe for your blade you should just not have a tube? The aluminum tubes might look very cool and cyberpunk without it…

I should probably also point out that you only need one big current carrier for a segmented blade. The negative sides will carry 1/6th of the current which doesn’t need a very big wire. Even at 100W, the return current will only be ~6A.

Finally, one word of warning: While each FET on the proffieboard should be able to handle ~10A, if you put 30+A through the board, things might start to heat up, so the board might also need some cooling…

I was thinking of using very thin-walled metal pipes, delicate enough to need the outer tube for protection, but no tube means that ambient air might suffice for cooling. Good idea, worth trying! Brass pipes for that classic steampunk look will be too expensive, but white-anodized aluminium can be dyed to look sort of like brass.

The weight could be a problem if I want to make fancy tricks, but I doubt this will ever be more than a crazy demo made for lols and giggles. I had another plan involving optic fibres in the blade and putting the LEDs in the hilt, but I can’t fit as many into that tight space.

And don’t worry about the Proffie overheating. I will connect a few LEDs in series and use separate drivers and a higher supply voltage for this. 5V is convenient, but for high power stuff I prefer to keep the current down by increasing the voltage.

My rough CG simulations of how a blade would look with this kind of design show, like you said, a dark core effect that is not very visible. Having a dark center and bright edges on a blade which is only 1 inch in diameter is something that is only visible in direct close-up views, and when you start waving the thing around it’s simply not visible at all.

However, it’s not a completely useless idea. The “reflective semi-diffusion” with shiny but not perfectly specular metal surfaces can achieve a higher light efficiency than a matte diffuser, and the open mounting of each LED on a metal structure can provide cooling, both by passive heatsinking and active circulation of air or water.

I will play around with some alternative geometries for the blockers and reflectors and probably build a few short prototypes, but for the short term I might put more effort into my cooled tristar-style blade: three LED strips on a triangular aluminium tube cooled by pushing air through it from a small fan in the hilt. I’m currently stumped trying to source the triangular tube in quantities less than 100 kgs…