It occurs to me that with a bluetooth chip, a Proffieboard might have enough components on it to drive a simple quadcopter… (While also playing sounds and showing lights…)

Brings a whole new meaning to the “prop” class…

That’s awesome. Ill make a Vader Quad and make it breath really loud on all the passes…
Seriously following this though…id be interested in the control options…

Hmm, looks like most drones use a 3-wire motor, which probably needs something like a stepper motor driver to run. Makes sense if the motors are brushless, but it means that driving them directly from a proffieboard probably won’t work. There seem to be some el-cheapo kits that use brushed motors though, like this one: 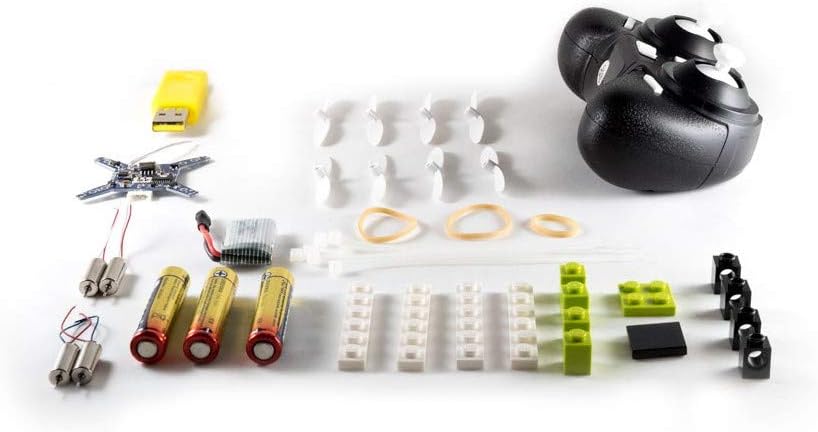 The Kitables' Mini Drone kit gives you everything you need to build your own functioning RC drone. With just a handful of plastic bricks, this kit is a great introduction into drone building and aerodynamics.

I was thinking more torture droid, with that whirring noise as it gets closer.

Generally anything that’s not super tiny like the thing you linked will use brushless motors, yeah. They use drivers (ESC → Electronic Speed Controller) which are similar to stepper drivers, but designed for high performance rather than precision. The drivers generally are controlled by a servo-style pulse.

I found specs for a quad about 1ft for length and width, and weighing 350g, with a 1000mAh battery, with flight time of 5-7 minutes. That would suggest average current would be around 6 Amps through each motor. The spike current for accelerating upward would probably be reasonable to assume could be double that. The specs I found for the mosfets on proffie say 13A max constant current, and there’s not enough channels to double up for four motors.

But you’d have another possible issue, which is size of flash memory for the additional necessary program, while also wanting to support a light show using proffie OS. Not sure how much free space is available after proffie OS, but from this ref: cleanflight/Customized Version.md at acc56ce09dc4cf67dd6712d7c228352659133ce3 · cleanflight/cleanflight · GitHub for an OSS flight controller, it seems that basic functionality fits in “64 megabits”, while the most interesting features are only enabled if the flash size is larger than “128 megabits”.

I agree that making a proffie drone would be impractical, but I’m going to argue some of the specifics anyways, because this is an internet forum, and arguing specifics is pretty much what internet forums are for…

First of all, it’s absolutely possible to build a micro-quad using brushed motors, but I’m not sure why exactly we would want to do that, the only reason I can think of is to prove that it’s possible.

A proffieboard only has 256k (2 megabits) of flash memory, but I wouldn’t worry about it too much. I’m pretty sure I can put a quadcopter controller into that space. It might not have all the bells and whistles, but it would work.