Crazy idea of the day: PixieFETs

So, we were recently discussing using external FETs for proffieboards, and it seems like a fairly reasonable idea to me. The FETs could go close to the battery, or close to the pogo pin board which could simplify things… maybe?

Also, I’ve been researching alternate CPUs for using for upcoming proffieboards since ST-micro components are still very hard to come by. However, many of the alternatives (ESP32 and RP2040) don’t really have enough GPIOs to do everything a proffieboard should do.

I’ve spent a fair amount of time looking into chips that could be used to control the FETs, and I think I finally found something that might work: 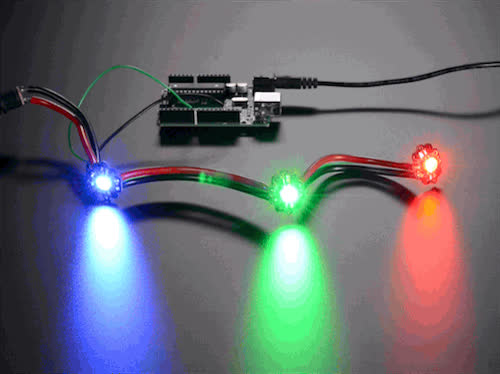 NeoPixels are plenty bright, suuuure. BUT ARE THEY 3 WATTS BRIGHT? No! They are not! That's why you need a Pixie. These chainable smart LEDs are not only super-smart, they are ridonkulously bright with 3W total, compared to 0.2W of a 'standard'...

This thing does almost exactly what I want, but it also has a LED on it. Basically I could “borrow” this design, simplify it a bit (since we don’t need constant-current capabilities) and make it into a 3-fet driver board, and it would only need one wire to control it. That wire could then be daisy-chained to another board, etc., similar to how neopixels are daisy-chained. Not only would this save 5 cpu pins, it would allow for nearly unlimited amounts of FETs if desired.

Of course, having lots of little PCBs in your saber isn’t exactly ideal from a mounting perspective, but that seems like a solvable problem.

As a bonus, the adafruit Pixie LEDs would also be supported, which could be nice in some cases. (Might make a good led output for a blaster for instance.)

Pixie Fett: the love child of Boba Fett and Tinkerbell.

Hmm, this might not work so well when I think about it.
The pic18f cpu on the pixie will draw power all the time, even when the main board is in standby or deep sleep modes… Cutting the power to the pic is of course possible, but adds complications and wires which might make this idea not work so well, at least for some users.

In my (little) experience, soldering the board with the wide wire needed for the FETs is a problem. And if the board could be simplified in such a way where all the wires are next to each other (say, speaker, switches, OLED, BT, etc.) it would make it easier. The fact is that if you could separate the FETs, you could use different rating on them. If I had the option of having a 20A FET to handle all my NPXL link, I think it could actually reduce the wiring difficulty.
Again, being able to route the big wires from battery to connector without having to go through the power port, kill switch and all that, would actually highly simplify most things (the cost would be a 1A limit on battery charging).

Am I missing something or would a simple breakout board designed to hold a few power FETS with the proper protection diodes and gate resistor be all that is needed? The gate signal would still come from the Proffieboard, correct?

If so, that would be fairly easy to design. In fact, maybe if we use a higher current FET like @baldusi suggested, it could be attached to the underside of the pogo board itself…

A big part of why I’ve been looking at this is that ESP32 and RP2040 cpus don’t have pins to directly control everything. Also, not all CPUs are actually good at producing PWM signals, and some can only produce a few of them. Having an external CPU do this would reduce the number of pins needed and make it easier to port ProffieOS to new CPUs.

Having external FETs that are driven directly from the CPU might be nice in some cases, but it would rarely actually be easier since you would need to solder one wire per fet.

I still think that being able to use differently sized FET would enable to use just one or two. Again, 20A wiring is the problem I found most difficult for wire routing. As long as the FET was turned off if the board is turned off, most of the things that make wiring cumbersome (power plug and killswitch, plus big gauge wires on the board) could be done away with.

would a separate FET board be good for heat management? I’m imagining, for example, the giant heatsinks that are sold on TCSS for use with TriCree style sabers. If power FETs were put on a board that straps to something like that, then I IMAGINE it would reduce the thermal load on the Proffieboard, but I don’t actually know if that’s even a concern. To extend the thought a bit further, IF that would be beneficial, then it could be combined with various blade cooling ideas from other threads, and allow for a single ‘heat block’ that all the heat sources are thermally dumping into, and which could in turn be connected to either the body of the saber or radiator fins, or whatever, to provide centralized cooling for any bits that need it. Just some thoughts from a position of ignorance. Feel free to disabuse me of any of them.

Yes, it would be good for heat management; if heat management was a problem, which it isn’t. In normal operations, the FETs shouldn’t put out a lot of heat.

As for attaching large wires to the board: Have you tried separating the strands into two smaller bundles, and put each bundle through it’s own hole on the board? (This is why I put them next to each other after all…)

One way to make these PixieFETs actually work would be to have the main board provide the power for the pic18f. Then the power can be turned off when the FETs aren’t needed. It means one more wire though, and one more pad on the cpu. (But I might be able to re-use the SD_VDD pad for this.)

I live in metric land, so I end up having to use 0.25mm² and 0.50mm² wire. It’s really not so much trouble the soldering. But those big and hard wires are hard to route, push the card upward (I do use tape, but the problem is during soldering) and having such a huge section next to the top FET makes it very difficult to solder without hitting the FET’s pads.
Again, is not the same to route a 0.16mm² or a gauge 28 wire from battery contact, to power plug, to kill switch, to board, and then be able to fit all that into the really small crevices and trenches than a huge 0.5mm² or two 0.25mm².

Pixie Fett: the love child of Boba Fett and Tinkerbell.

Is it off-topic that I know an artist/animator that could make the visual for this happen?