This idea might need a drawing, but I’m too lazy to make one right now…
The idea is to use a small pin, to punch a hole through a layer of solder paste to make one small, precision deposit.

I was thinking that you could have a metal part, sort of similar to a water block for water cooling, smaller, and with only one connector. That connector would connect to a spring-loaded solder paste syringe to feed solder paste into it. The top and bottom of the metal block would have a small (0.5mm?) hole drilled into it, through which a small pin would fit. The inside space in the metal part would be fairly thin, like maybe 1mm, maybe even less. The idea is that by moving the pin up and down, you can feed a small amount of solder paste out through the bottom hole. That solder paste would be on the top of the pin, so you could deposit or smear it on to a circuit board. As long as the pin is going all the way through, there would be no leaking, and since the hole is very small, the spring would probably not be strong enough to cause much leaking even if the pin was left in the “up” position.

The “up” position should probably have an adjustable stop to only let in a small amount of solder paste each time. The device could be operated manually, similar to a pen, or it could be connected to a servo, motor, or magnetic actuator. (Probably a servo, as that would allow for some precision adjustments while not being fast and jerky.)

Now for questions: Does anything like this already exist? Or something similar to that could be easy to modify for this purpose?

It’s possible that it would still just become a smeary mess of course, but I feel like a design like this could be effective in dealing with the high viscosity of the solder paste.

I might be able to make this in a regular syringe.
I can use a 27AWG tip, which has a 0.21 mm inner diameter.
I can then get a 0.2mm spring steel rod, and thread it all the way through the plunger and in to the tip. I’ll probably need some sort of guide thingy to make it go back in the tip when it is pulled out though… I might be able to just bend the spring steel wire back and into a loop to make it easy to operate with one hand. (stick a finger in the loop and move it up and down to operate.) 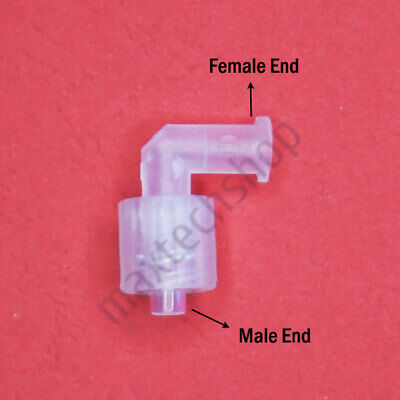 Find many great new & used options and get the best deals for 90° ELBOW Plastic Luer Lock Male to Female Adapter Fitting Adaptor Connector at the best online prices at eBay! Free shipping for many products!