I will start with what might be my weirdest selfie so far. Well, one of the weirdest: 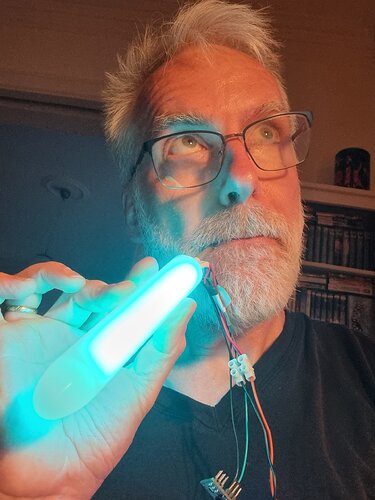 The test was succesful - by gently blowing or sucking (nnnngh must-not-make-immature-mature-joke) I could keep the Neopixel strips from overheating on full power - color 255,255,255 for all pixels. I learned the expensive way that this is a sure way to fry expensive LED strips sweating in foam, but the problem isn’t the amount of heat that is generated - it’s that a regular blade is basically a thermos flask that keeps that heat trapped with no way to escape. With this air cooling I can get MOAR LIGHT from Neopixel strips. With enough circulation, I think it would be possible to run three or even four LED strips on full power inside the blade. With water cooling instead of air it’s definitely possible. Not sure if I can fit a water pump, a radiator and a fan inside a hilt and make it strong enough to cool something like 100W, but hey, engineering challenges are my kind of fun!

Now I need to test how strong the final electric pump/fan needs to be, but I think a good fit will be the innards of those rather useless but cheap USB vacuum cleaners for keyboards. An aquarium pump would fit nicely inside a saber hilt as well, and make much less noise, but it probably wouldn’t create enough flow.

Hmmm, some sort of thin heat sink non-conductive material for the win?

I just put the strips on a flattened aluminium tube and push/pull air through it. The return flow goes on the front of the strips, but the hot air could be let out at the tip if foam is required for light diffusion. I get away with using a milky white thick wall blade and a thin diffusing tube, so my strips have a small air gap above them.

Maybe the lightsaber “hum” is really an aquarium pump?

The mechanical vibrations and the sound from a pump certainly wouldn’t break the “realism” of the device. Both would be quite believable, in some twisted meaning of that word.

I think a small air blower will suffice for cooling the pixel blade, but my 100W blade, which is still an ongoing project, might need water cooling. Considering how the batteries, scavenged from a power pack for a cordless power tool, will be drained in ten or fifteen minutes at full power, it would be possible to ditch the radiator, just let the circulating water gradually heat up, and refill with cold water when I change batteries. 300ml of water will add a significant weight to the blade, but I’m not exactly aiming for ease of use here…

Use alcohol and have let the evaporated liquid out through tiny holes in the blade for a smoke effect… Just don’t get it close to an open flame.

Perhaps I shouldn’t admit this, but I considered boiling methanol as a coolant, because its boiling point is about right to keep semiconductors from overheating. I was thinking of recirculating the steam, though, like in a heat pipe. Still, I realized that having a light saber filled with scalding hot methanol was a stupid idea.

A friend of mine with a degree in chemistry suggested making a chemoluminescent blade. Apparently, all you need is some mildly toxic and ridiculously expensive chemicals and a tank of absolutely lethal chlorine dioxide to fuel the reaction, and you can make a super intense replenishing giant glowstick with almost zero heat dissipation.
Unfortunately, that device would not be legal to use outside of a sealed lab with emergency ventilation, and you would be well advised to wear a hazmat suit while wielding it. But it would make a great Youtube video.

your friend is a mad lad.

Mad scientists are totally a thing. We have a secret handshake, and in private we all wear lab coats with double buttoning and weird looking goggles.

The wind is nature’s emergency ventilation.

What about a heat pipe like those used in laptops? That way maybe the hilt could act as a radiator. 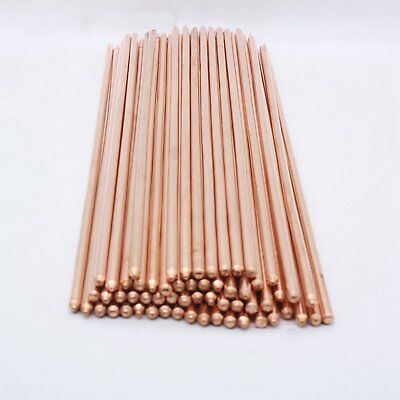 It is used for Notebook Laptop CPU DIY! Material:Copper, thermal liquid containing internal. Otherwise deal is final. All products are quality checked. For You in Here We will be happy to resolve any issues you may have in a cordial and friendly...

I had some thoughts on using a home-built heat pipe, but it’s probably an overkill, and it’s somewhat brittle, as even a small leak causes a heat pipe to instantly lose most of its heat transfer capability. Another thing is that a heat pipe requires a rather large temperature difference, a few tens of degrees C, between the hot and cold ends before it starts transporting heat efficiently. I prefer to keep the blade cooler than scalding hot, and a small circulation pump is cheap and easy enough to add.

And, as I mentioned above, a 100 W blade will get only short runs on battery power - 15-20 minutes if the batteries are to fit inside the hilt. In that time frame, even a rather small volume of water, like the 300 ml or so that will fill up the inside of the blade, will keep the temperature rise to within reasonable levels even without circulation. When changing the batteries, you could also replace the coolant with fresh, cold water if the blade has run hot. Low tech and not very impressive, but pragmatic.

I do have suitable aluminium and copper tubing, fine copper wire mesh for the “wick” and some cool looking heat sinks (pardon the pun) to put on the hilt, so perhaps I will try to build a heat pipe after all. The scientist in me does not want to to dismiss ideas without experiments…

Mineral oil pump maybe? We see this in battery enclosures in the new style of electric mobility scooters.

Interesting variation. I have used silicone oil as a non-conductive, non-corrosive and transparent coolant to cool naked LED chips mounted on glass, and that worked well. However, I don’t want to fill a light saber blade with oil. It would get really messy if it sprung a leak, and with my luck it probably will. Water is less problematic, and cheap, and I think it will do the job. We’re talking 100W here – a lot for a light saber, but still about an order of magnitude less heat dissipation than an electric scooter.

Hmm. Visions of me carrying the scavenged battery pack from a trashed scooter in a backpack, with wires to the hilt. Not great for spinning, but it would increase the running time by… my advanced scientific computations say “a lot”.

Good that you mentioned battery cooling, btw. I need to make sure the Li-Ion cells I pick for this have a low internal resistance so they don’t run hot. I have plenty of scavenged cells from power banks and laptops, but I might need to find cells with higher current capacity, like the more expensive kind that is used in power tools.

Well…if you go the Protosaber route, you can also put your cooling in the backpack. Should make the cooling a fair bit easier…at least in cooling down the water.
And depending on the size of battery, the pack can also look like a belt attachment maybe.

My small idea for an integrated saber was making it more like a staff (maybe the wrong word…but make the hilt longer…thats all I want to say…), with the lower part of the hilt as a heatsink, just exposed…if the water temp gets an issue…and I would be a lazy peace of shit and wouldnt use it, if I had to change the water every time.

I was thinking of making a power pack with batteries and a water tank combined, so that both could be changed in one go. Completely draining the system would probably not be necessary, although it would be perfectly possible to pump the water which is inside the blade back to the tank prior to swapping.

The proto-saber format is an easy way out of many of the engineering problems, but I would prefer a self-contained saber that could be wielded more freely.

I am reading up on low pressure evaporation cooling. Heat pipes rely on capillary forces to recirculate the small amount of liquid inside, which places a limit on their length, but a low pressure “heat pipe style” evacuated system containing only water and water vapour could have some sort of active water redistribution system inside. It would collect the droplets of water that condense at the heat sink end and send it back to a few points along a heatpipe-like tube, with a wick inside to make sure the water reaches everywhere along the blade. This is overthinking it for a Neopixel saber, but there are considerably stronger LED chips that could be packed into a blade, given enough cooling.

The first thing I would try would be to simply mount the LED strips on an aluminum rod. Won’t be easy with the 5050 sized strips, but if you used the smaller 3535 strips I think it would work. Simply run the rod down into the hilt of the saber and make sure there is good contact. The conductivity of aluminum by itself will basically give you a giant heat sink. if you wanted to get even more cooling, add some fins on the hilt somewhere. This would of course require a different electrical connection than the usual bullseye disk, but it should definitely be possible.

I tried using passive cooling already. Even with an uncomfortably heavy 10x10 mm solid rod and a solid aluminium hilt that stayed cool enough to hold it without gloves (I used myself as a heat sensor), the pixels near the tip burned out at full power. It took a few minutes for the strips to overheat, but there is lots of plastic and foam that prevents any heat from escaping any other path than down towards the hilt, and apparently the thermal resistance even in a solid rod was too high.
Or, maybe the part that burned may have come loose from the metal rod. It’s hard to tell after the fact whether they detached from the rod because they melted, or vice versa. Perhaps I ought to read up on how to do the math on heat transfer, but a hollow square 10x10mm profile with liquid circulation cooling will definitely do the job, and be a lot less heavy. That solid rod felt almost like an actual weapon capable of dealing some damage, and I don’t want that. With my relative lack of grace, I would probably hit myself in the head with it.

Speaking of 5050 vd 3535 LEDs, I just tested some strips with the improved 5054 chips. Wow, what a difference. The thermal resistance from the die to the back of the chip is a fraction of that in a 5050 package, and these things can be overdriven something crazy if you provide enough cooling. These are simply great!

instead of a 10x10 square profile, you might use back to back triangular profiles, pump up one and down the other. bear in mind though that the weight of heat transfer fluid will be significant, and you won’t end up with weight much better than a solid rod of aluminum.

I think if the solid rod doesn’t work, the next thing I would personally try would be to create a heatpipe out of said triangular profiles. I don’t know off the top of my head, but I suspect that it would work almost as well as fluid pumped by an aquarium pump, and would be much lighter, consume no energy, and would potentially be less complicated. I’m not sure how tractable making a heat pipe is though. I THINK you have to get the concentration of vapor in the pipe pretty precise.