Not really a build, only an image of a lucky find in the component drawers from my teenage years: 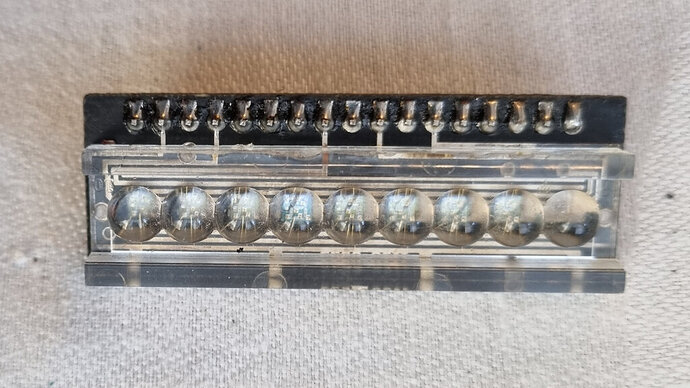 I see these “bubble displays” being faked with just plastic in Vader/Anakin saber replicas, and I was thinking of using a row of 5mm LEDs to at least have some functionality, but now I could actually use the real thing and wire it up to display some useful information in ugly seven-segment characters. It’s hopelessly dim, of course, being a 1970’s LED part, but hey, it’s the actual screen-accurate vintage item, unused.

Driving those things are pain though, and since proffieboards don’t have enough gpios, you’d need an external chip to do it.

Agreed, this requires 16 I/O pins to wire up without assisting circuitry, or 11 with a 3-to-8 decoder. I’m no stranger to adding peripheral CPU boards to my builds, though, and the 64 bits required to display any possible pattern of segments could be sent serially over a single I/O pin in a wink.

In my head, I started designing a serial interface with two 4-bit counters, one 3-to-8 decoder and an 8-bit shift register – four simple logic chips plus possibly some logic gates. Then I realized that a Raspberry Pico and a simple program snippet makes for a smaller, cheaper and easier build. The circumstances for hobby-level digital circuit design has changed quite radically in recent years.

RPI2040 comes in a varity of board sizes, but most of them are still fairly large-ish.
The sparkfun pro micro RP2040 might be a good size maybe…
Although I would probably use the Adafruit Arduino Pro Mini 328 instead.

Good advice, thanks. I just happened to have a couple of Picos lying idle, and the somewhat clunky board would fit quite nicely beneath the bubble display, inside the little “control box” on the classic Graflex design. There’s also plenty of room in a hilt with that diameter.

If I am to buy new stuff specifically for this, the driver MAX7219 would be a perfect match, even though it costs about as much as a small processor board. If I’m feeling lazy, Adafruit has a somewhat clumsy 7219 breakout board that sells for about the same as the loose IC.