“Battle Mode 2.0” - Here’s the culmination of all the new effects, features and capabilities I’ve been working with a lot of help from Fredrik. 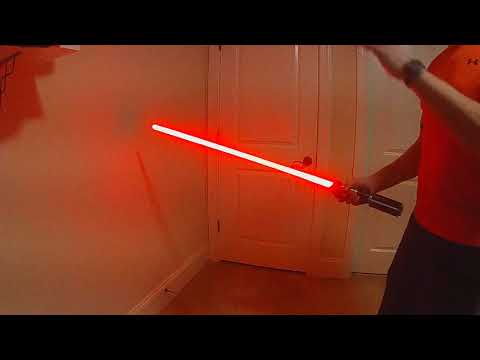 Ever since OS5 released I’ve been chasing a lot of these improvements and thanks to Fredrik’s support they’re all now coming together for a new level of realism in effects, sounds and responsiveness for OS6.

In my previous video I showed the new “Real Clash” capabilities which allow you to have your effects and sounds based on clash strength (how hard you hit your blade). That was part of the larger picture to take Battle Mode to another level. In Battle Mode 2.0 there will be a Clash Detection Threshold you can set so that you can keep traditional Clash effects and sounds active for lighter or medium clashes but still use Battle Mode’s Begin/End Lockup capabilities for all clashes above the new threshold. This way light bumps or hits will not initiate lockup and you can use your Real Clash (if enabled) to create more realistic clashes for quick light hits.

Then I enabled Real Clash for the Begin/End Lockup sounds so they are now chosen based on how hard the clash plus I’m using the Clash Impact Function on both the Begin and End Lockup effects so the effect reacts to the strength of the clash (on top of being fully responsive to the blade angle - so maybe it’s Responsive squared now ;-). And to add the final dimension I’m using my Intensity Lockup effect where the longer you hold the lockup the more unstable the effect becomes as the energy of the two blades builds up.

The end result is so much more realism and immersion in the effects and a new and improved Battle Mode that lets you really dial in the blade sensitivity and effects as you use the saber.

There will be 2 new defines that you can set to enable Battle Mode 2.0 (default will still use original Battle Mode with a few improvements) but the new defines will let you select the detection level for Clashes in Battle Mode (so the maximum clash strength that uses Clashes) as well a define to enable Real Clash on your sounds (since you need to set the font up to support). I’ll have more information on the defines once I find the right range to set things at and a full explanation on usage.

Finally, there’s two changes/improvements I’m including for Battle Mode 2.0, the first is that Drag can now be initiated by pointing straight down and stabbing or clashing, this is to address certain set ups where Stab needed to be done much harder for detection. The second is Battle Mode will now be toggled (outside of Gesture ignitions if enabled) by simply holding Aux (long hold) rather than holding Aux and swinging. To make it easier to use for those who prefer to do Lockup in normal mode with your Aux button.

I’ll be fine tuning and testing a bit more and will include all the instructions in the final write up.

These are very exciting times with Edit Mode and Battle Mode 2. I look forward to all the implementations of these new features as we approach OS 6 Beta Testing, and beta testing on Proffieboard 3.0!!!

I know the video card gpu shortage is easing up so it should get better soon.

The gpu shortage is easing up because nvidia is putting in anti-mining code in their drivers, not be cause the chip shortage is getting better. The chip fabs have a huge backlog of things to do, and for the most part, the high-margin chips will be made first (which is not the chips used on proffieboards.) While I hope for things to get better sooner, current projections have the chip shortage lasting well into 2022, and that assumes that people calm down a bit and stop buying chips they don’t need.