So I bought an Aouye soldering station, but the software is kind of dumb. It always starts with the default temperature and air flow settings, which is really super annoying. In addition, I think it should be reducing the air flow when working on heating up to heat up faster. (It has a cooldown mode where the air runs faster to cool down, but it doesn’t have a heat-up mode to heat up faster…)

Anyways, instead of just sending it back, I decided to open it up to see what I can do about it. Here’s what I found: 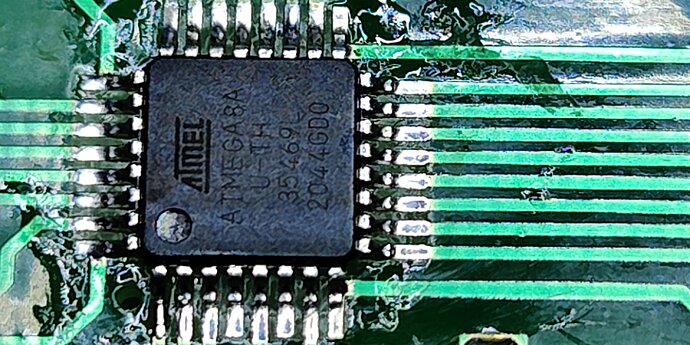 So instead of making a backup, I’m just buying another Atmega8A chip. That way I can just replace the one that’s on the PCB with a different one and leave this one programmed the way it is.

While I wait for my new chips, I’ll start working on the program. It should be relatively simple. The board has 7 anode connections to the display (one per segment) and 8 cathode connections (one per digiit). There are 6 buttons, one of which is latching, and then there are 4 pins that actually hook up to the rest of the soldering station. I suspect that these are configured as:

I need to measure these and make sure they work the way I think they do, and also which is which.

If I could find a cheap air-flow sensor, I would see if I could replace the 50/60hz input with an air flow input, but I that seems hard to find.

Nice! You could probably mess with some PID to get even more accurate/stable temperature output. It might be a good idea to create a output curve by measuring temperature droop for higher airflow. You’d need an external thermocouple to calibate it the first time.

…all this in the spirit of doing something rather unnecessary for the heck of it.

Got my processors today, so I figured it’s time I did some analysis on what control signals coming in/out of the control board looks like. Here is what I found.

There is a 10-pin connector between the control board and the power board.
Here is what each pin does (seen from the front)

The synchronization between the AC sense and the pump control looks like this: 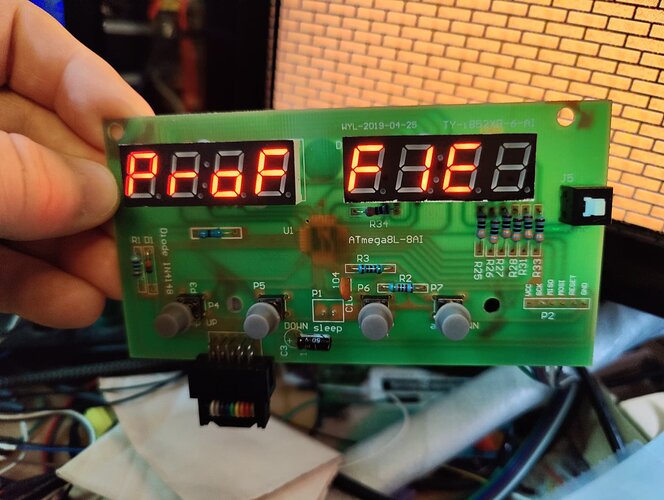 a full custom job I see.
like the extra touch!

I’m a little annoyed with whoever designed this PCB. Neither the pump control, nor the heat control are routed to PWM-capable pins. Also, the AC sense is not routed to an interrupt-capable pin.

It is possible to get an interrupt from the AC sense by using the on-chip comparator, but you can’t use the ADC at the same time. So either I have to poll the AC sense, sync it to a timer, or timeshare the ADC mux. All of these options makes the programming more complicated that it needs to be.

Assuming I sync the pump PWM to 120Hz, like the original firmware did, synchronization precision has to be fairly good, otherwise the power levels will fluctuate. (Since the power is likely going to be increasing at the time that I cut it off.)

Also, the last digit on the display is not controllable at all. Seems they ran out of pins, however I’m reasonably sure that could have been worked around with a little charlieplexing.

Just in case there is any confusion about how dangerous it can be to re-program your soldering station: 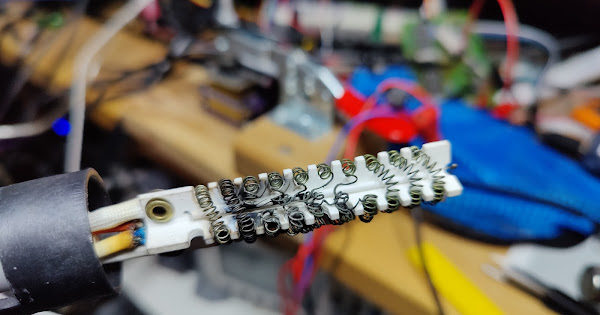 While I was trying to figure out something, I accidentally left the heater on. After a little while, I heard a small pop, and a small blue flame appeared from where the hot air is supposed to come out. After letting the whole thing cool off, I took the handle apart, and this is what I found…

These heating elements only cost $15 to replace. Luckily I’m not stupid enough to leave the handle on my desk or somewhere where the heat could have done additional damage, but still…

The SparkFun FS3000-1005 Qwiic Air Velocity Sensor Breakout can help you accurately determine the speed and consistency of air moving around you.