Any idea what color(s) closely match the Graflex and Obi lightsaber blade colors from ANH? I thought it was deepskyblue, but unsure.

Which version? The ANH sabers have slightly different colors each time they re-master it. At this point I think they might be doing it on purpose to confuse people.

Ha, great point! I am judging by what my eyes see when I watch on Disney+ streaming now. I imagine it has varied between Cyan, DeepSkyBlue, or DodgerBlue if I had to venture a guess.

So, you would think that you could just take a screenshot and take the rgb values from there, but there is a LONG LONG list of why that’s not going to be completely accurate, here are a few of them:

There is one way that potentially works though: Take a video of your saber, then take screenshots of ANH and your video and compare the two. If they match, then all then all the inaccuracies and conversion is basically moot since they should cancel out.

Personally, I just want something that looks good, so I usually go with cyan, but there si probably a better color somewhere between Rgb<0,0,255> and Rgb<0,255,255>.

Thank you for the exhaustive write-up. Your points are all well heard.

For the sake of my rudimentary needs, i.e., accurate enough for me and others to feel like it’s the right color, I am targeting one of the aforementioned. Cyan is great, and I feel like it’s between that and the DeepSkyBlue, potentially closer to the latter.

On video comparison (I’ve tried this more than I want to admit), the Cyan looks a bit too green and the DeepSkyBlue looks like the right color. However, for Obi’s ANH color, it seems closer to DodgerBlue.

I wonder what others may use. Thanks prof.

I use these on my Graflex

For the sake of my rudimentary needs, i.e., accurate enough for me and others to feel like it’s the right color

Start with a color you “think” is right and use Color Editing with ColorZoom to adjust it to what your eyes “see” is right.

As profezzorn notes, how you perceive the color is affected by many factors, external lighting, other colors in the environment, etc. Plus not every blade is built the same, leds, diffusion techniques, clear or sanded or trans white blade materials all affect the color you eye “sees”.

Not to mention the color of the blade changes version to version and scene to scene in some cases.

I’d pause the movie on a scene you like and use Color Editing and Color Zoom to dial your blade to match based on your eye.

Of course, the next time you watch it’ll look different because of all the factors above but at least for that given moment in time it’ll match

Thanks @astromech and @Fett263. I’ve learned the following:

For now, I’ll use Cyan and tweak from there. Next up is Obi-Wan from ANH, specifically Mos Eisley Cantina scene. I’ve been using DodgerBlue for that one, but will give it another look.

Thanks all and Happy Thanksgiving to you if in the U.S.

I find that Cyan matches the original cinema release version, though on screen it is a very washed out cyan which you can’t get on the blade.

I started with Cyan to compare against current Disney+ version. For purposes of the test, I compared a photo of my blade with the selected color against a screenshot of ANH on two devices w/ all color corrections turned off.

Closest I get my photo to be to the screenshot on Disney+ is Rgb<21,255,255> (slightly off Cyan). Here’s my unedited photo for reference. 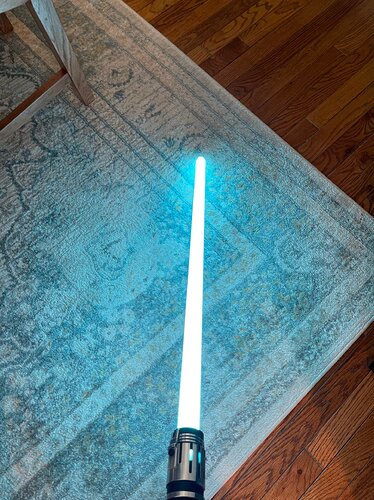 I would use the same camera to capture video and to grab an image of the tv screen playing ANH. Then you have one reference, and just tune the saber till it matches.

To match the Disney+ version (which is somehow different than the 4k Blu-Ray and then the earlier Blu-Ray), I mostly go Rgb<30, 255,255>. And also to boot sometimes different blade components’s can give different colors (KR pixel strip vs regular 5050’s vs cheap LGT blades).

FWIW @astromech hit pretty damned close to the values I have saved.

Appreciate you doing the demo video. Looks great on yours, likely amplified by being on video. I’ll do a similar test in a dark environment and see how that comes through.

That’s closer to the Ahsoka silver…

The camera really does make it look a tad whiter than it really is. If I set it side by side with an Ahsoka silver, you’d see the difference.