Has anyone had any experience of the 89 Sabers Luke V1 with the little 89 accent LED pcb?

I’ve wired the pcb up to an LED pad in the same way you would a Bluetooth module. But when I boot the saber, the whole Proffieboard freezes, necessitating a hard reset using the Boot/Reset buttons on the board. However if I upload a config that bypasses that 89 accent pcb, it works fine.

I’m guessing it needs a capacitor between 3.3 volts and Ground as with a Bluetooth module. Just thought I’d sound out the collective wisdom here before I start changing stuff.

Any thoughts much appreciated. 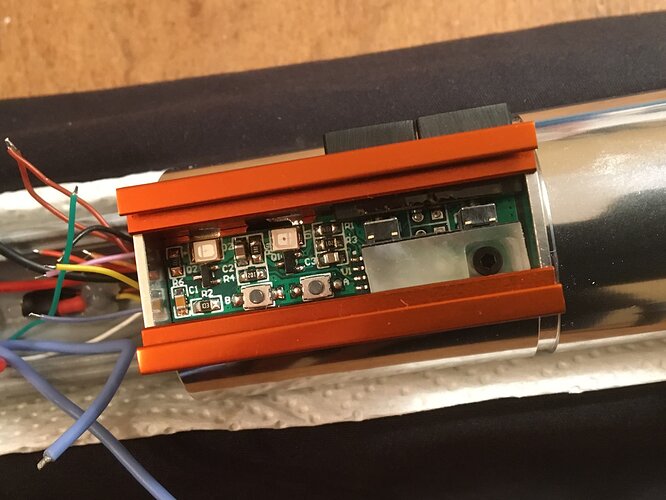 I don’t know anything about this PCB.
Does the board has any kind of documentation?

Unfortunately no, there’s no documentation.
The only wring connections are a positive and negative (plus the main saber switches, but they’re just traces and don’t go through any of the electronics).
The switch pcb works perfectly - it just freezes the proffieboard in the process.
I’ll try the capacitor thing I think.
Will report back…

I’m thinking that maybe it should be powered from BATT+, not 3.3v.
But without documentation, who can say?

Yeh possibly. Although I tested using a 3.3 volt power supply to check that it worked before installing it, and it worked fine. Likewise, in the saber, it works fine - it just seems to upset the Proffieboard in the process.
Unfortunately being from 89 Sabers, it’s tricky to get any kind of info as the guy there, whilst being a great saber builder, is notoriously difficult to contact or get any info from.

I wish I could help, but without documentation, or experience with the board itself, it’s all guesswork.

I added the capacitor between 3.3volt and ground a’la Bluetooth wiring, and so far it seems to have fixed it!

I must admit I’m quite surprised that a pcb with just two pixel LEDs and a small chipset to animate them draws enough power to upset the Proffieboard, when wired through a main LED power pad, but as you say Prof., without knowing much about that pcb, there’s not much more we can say about it.

The only very small weirdness I’ve observed now is this:
That 3.3 volt pad is also used to drive a another 3mm accent LED, with said LED’s respective neg going to another LED pad…
As an experiment, I set it so that the first preset had the switchbox pcb switched ON in the config, while the second preset had it OFF (StylePtr< Black >(),). The 3mm accent was set to blink on both presets.
When I boot the saber all is fine, when I go to the second preset the switchbox pcb shuts down correctly, BUT the other accent also stops, even though it’s coded to keep going. Then if I switch back to the first preset, the switchbox pcb powers up again (correctly) but the other LED stays switched off. The only way to bring it back to life is to reboot the saber with kill switch.

No biggie, but thought I’d mention it in case there’s something relevant in there.

The LED power pads can handle a lot.
The 3.3v pad cannot.

Unless this board needs 3.3v, you should probably connect it directly to battery power instead of the 3.3v pad, as that will make everything work better. (Of course, if there is no docs, there is no way to know what the board needs, and you might just fry the board by connecting it to the battery…)

I recommend measuring the voltage on your 3.3v pad. The accent LED might be turning off because it’s not getting enough voltage.

Yeh I thought about trying it hard off the battery +, but as you say I was worried about frying the board in the absence of any board specs. The LEDs on it are very bright even at 3.3 volts, so I didn’t want to risk it, especially it will be impossible to get a replacement if it does blow. As such I’ve simply gone with the capacitor and left the pcb ON with every preset, which seems to be working.