A while back I found these 288-led-per meter strips, and I’ve been wanting to
build a zigzag quad-blade using those ever since. ProffieOS6 has some optimizations that makes it better at handling a lot of LEDs, so I figure it’s time to start building. 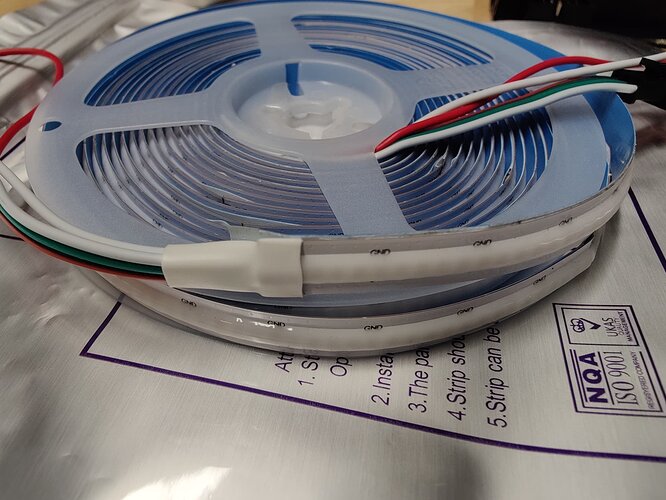 The idea is to fold one of the edges of the strip into a 90-degree angle, then the four strips overlap partially and form a sort of pinwheel shape around a 6mm square wooden dowel. We’ll see how well it works…

The final blade should have about 1060 LEDs, twice that of my current zigzag quad-blade.

i’m very interested to find out how well these work / turn out.
i’m hoping as they have what looks like a silicone covering that the light from them should be quite well diffused making our job a little easier.
i wonder how much current they draw

just did a quick google search and found these too

Plug in and glow with this incredible, ultra high density NeoPixel strip with an astonishing 332 LEDs/meter. That's no typo, this half meter strip has 165 miniature NeoPixels ...

More than ~1000 pixels in series is going to get frame rates that are too low though. (Unless you use dotstar pixels, which requires an extra clock line.)
There are apparently some neopixels that can be clocked at 1.6Mhz though, which could enable even longer strings.

Holy cow Prof. That is a project I would whole heartedly dive into. I am working on a 2 handed hilt now that might be big enouth to stuff the electronics in. Can you share where you picked those up at? You may have given me a new project to work towards.

The elecronics is no different from any other board.
Looks like I remembered the pixel density of these things wrong.
These are 332 pixels per meter. Not sure where I bought them though.
Depending on the length of the blade, I might end up with 1200+ leds in the blade.