So, my Windows 10 computer crashed (failed hard drive). I had to buy a new PC. It is Windows 11. I did my personal setup last night, which took awhile to recover what I could. Today I began installing all the software needed to program proffieboards.

GREAT NEWS!!! After installing Arduino, Proffieboard Plugin, just for poops and giggles, I plugged in a proffieboard into my PC while Arduino was open, and what do you know? The port showed up!!! Never ran zadig. So, apparently Windows 11, at least the version I have, already has the appropriate driver set up. Um, I was also running screen recorder while I was setting up the computer so BAM. I’ll have a new video tutorial about how to set up a windows computer from scratch…this computer fiasco has been nuts.

Now Windows is truly better than MAC…just kidding BC. EDIT: um no But it sure makes things a lot easier. I think its also what is tripping up Windows11 users. If they run zadig when the right driver is already installed, that messes things up.

Now, I have to go back and try to re-author OS6 configs for my sabers. Hopefully I put the config on sd cards…I usually do. Just need a few for cut and paste. Then I have a bunch of cool sabers to program. 2 graflexes, one vintage, one 2.0 both with master chassis. MHS Custom. And a KR Custom. I have 4 brand new installed lightsabers that need programming! Off to the races. PS, hope to be live Monday. Video of the install on Custom MHS.

Zadig doesn’t affect the port. The port has worked with windows without doing anything since Windows 8. You still need zadig for the upload to actually work though, otherwise you’ll probably get a 1-10 countdown with no upload progress bar.

I havent tried uploading yet, standby…

Ran zadig per instructions, Im up and running and able to program proffieboards again. 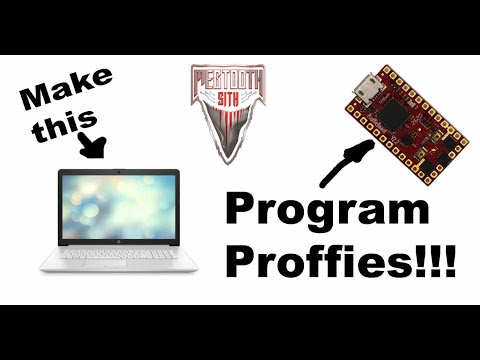 I love that "Dude on the airplane thing " video! lol Thanks Tom, great of you taking the time to contribute this how-to.

Now Windows is truly better than MAC…just kidding BC.

It’s not “MAC” It’s Mac, or mac if you don’t like to capitalize, or a macOS computer, or maybe you call them Macintosh computers and refuse Apple’s abbreviation, but regardless, it’s not MAC, it’s simply a Mac, otherwise we’re talking about Media Access Control… and that’s different…

Yes, this bothers me that much, lmao.

I never say anything. I let my OCD gurgle but thank you for letting me know I’m not alone at seeing this all the time.
Tom’s allowed to though