This is a quick demo of a brand new feature/effect I’m working on for ProffieOS7. 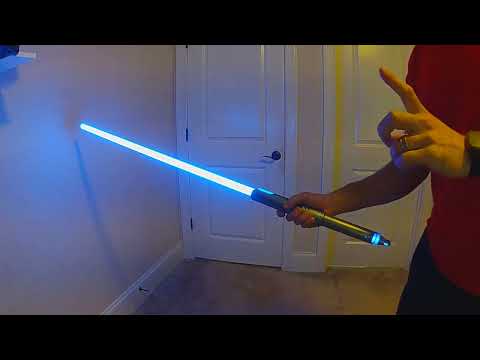 It’s been just over 2-1/2 years since we introduced visual Preon effects (OS4 - video here: Introducing new Preon Effects for ProffieOS 4 Neopixel Lightsabers - YouTube) and now we’ve seen all kinds of variations of animations and sounds be developed. The only drawback, particularly for longer, drawn out preons, is “waiting” for your saber to ignite. It’s fun to have a sparking preon, like your saber’s a little faulty, but those are typically just long animations that have to run out before the saber ignites. Now with Interactive Preons, you can set the effect up to respond in real-time to any interactive control.
This demo is a faulty ignition, but just like when Han Solo smacked the Falcon, you can give your saber a smack (or in this version a quick twist) to get it to ignite and cut the preon effect short. With this style, if you just ignite and leave the saber be it will sputter 4 times before finally igniting, however, at any time during the preon, you can give it a hit or a quick twist in one direction (new Interactive control) and it will ignite immediately and interrupt the preon effect. This allows for a far more immersive and realistic feel from your saber.
The best part, everything is controlled by the style itself, which can now interact with the prop, allowing for each style to have it’s own unique controls. You can set up different presets to run with different interactive controls for preons or other effects and have multiple unique experiences on a single saber (more on that in future videos

This is just one example, we can build these new effects to respond to any of the interactive controls we want and we can have them run completely different in every preset. We can also create a preon that acts like a “security” feature. Where the saber won’t unlock unless you do a certain interactive step within a set amount of time from pushing the button. If you fail to unlock the saber it will not ignite, and there’s a ton more uses.
And the Interactive Preons is just one small new feature coming in OS7, I’m working with Fredrik on some really big, game-changing features and capabilities, but those are for another video, so stay tuned…

Nice! No more need to be subtle about a hidden movement to activate it via BattleMode. Just smack it into submission like Grandpa did with a hammer.

Battle Mode is prop based. It cannot be controlled by this method, two separate things. For Battle Mode you’d use a prop that handles and the defines that control it. These interactive styles can’t control Battle Mode, that is set via the defines you’ve selected.

Got it. Watching the video and seeing how you are allowing the bladestyle itself be independent of the next like you said further in is definitely groundbreaking.

Sure, let me clarify what I meant. In OS7, certain controls, like press PWR for ignition, will be able to act differently IF a style contains certain effects that “override it”. EFFECT_INTERACTIVE_PREON is one such new effect that will take the PWR button action to start but it won’t ignite the blade until the interactive control (which can be any function(s); SwingSpeed, SwingAcceleration, TwistAccerleration, BladeAngle, TwistAngle, etc.) does the actual ignition -or- the style can do the ignition at a set time (or in this case a loop). Since it’s determined by the style, your next preset could use a different (or no Interactive Preon) with different functions to allow for a different method.
EFFECT_INTERACTIVE_PREON replaces the normal Preon effect but CAN act differently depending on how you build it giving more freedom for interactions.
This will be for specific initial controls and specific new Effects within my prop. This is just the first example, there will be a “suite” of new effects that act like this to further enhance your experience but they are all new.
Now things like Battle Mode, Choreography Mode, etc are not actually “controls” they are a “mode” in the prop that affect how multiple controls work.
It will make more sense once all the pieces are done, this is just the first piece.