Still no dice. Crashed the program with what I am assuming invalid values, changed every button, it still just looses that resonance to it. I expect it to lose a bit of depth, but why would that entire resonance just disappear?

So part of the issue here is the voice is made with comb-filters and stuff. That’s pure tone frequency modulation and gets lost in translation. I’m playing with some values but the essence of the original sound isn’t likely going to come through.
Oh yeah, turn on “Pre-Emphasis Alpha” for better highs.

Maybe ralph instead? This is the result:

why would that entire resonance just disappear?

Because you reduced the snapshots of the wav used to create an audio waveform from 48000 to 8000? The detailed information isn’t there.

Ah ok. That makes sense. Let me play around a bit more with Pre-Emphasis Alpha and see if I can make it sound any better. 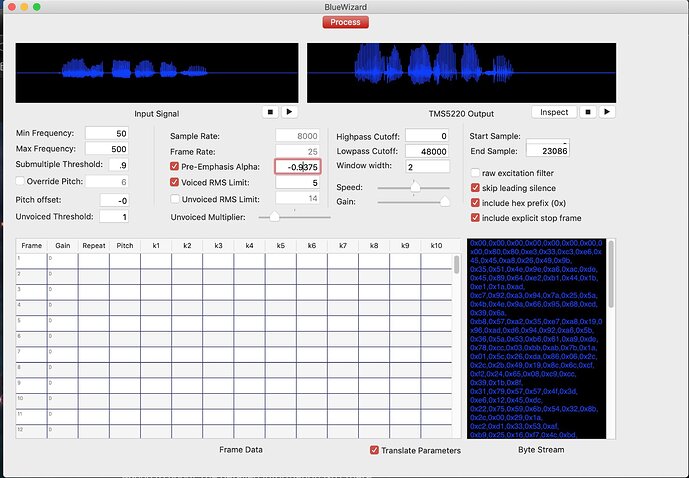 Because you reduced the snapshots of the wav used to create an audio waveform from 48000 to 8000? The detailed information isn’t there.

But I did that in audacity beforehand and that sound was still there?

Yeah I know. It’s pretty hacky doing this. Speech synthesis isn’t robust at all in case you haven’t noticed lol

Wdym? lol. I might just have to live with this sound, or try another TTS voice which I think might do better with this and which has the sound I want

It sounds pretty bad in the clip you posted.

Wait, I’m completely confused and thinking wrongly. Ya, it sounds ok, but I’m more or less trying to match this:

Of course pretty loosely, but something kind of like that I guess… in some vague way

I think I was using Allison and it was pretty good. the TTS sounded fluent, and it kind of ish had the sound I wanted.

I’m gonna try and mess with the Allison voice in Audacity and then see if it goes through BlueWizard nicely.

I don’t think you’re going to get any flange effect to come though .
Besides, hearing these errors should be extremely rare.
There’s plenty of customization you can do of playing actual wavs in the OS.
You can invent effects and have USER defined events etc…

Ya… that’s true… But at this point I am committed. I appreciate all the help and tips! Let’s see how much time I can waste on these which will rarely be heard… 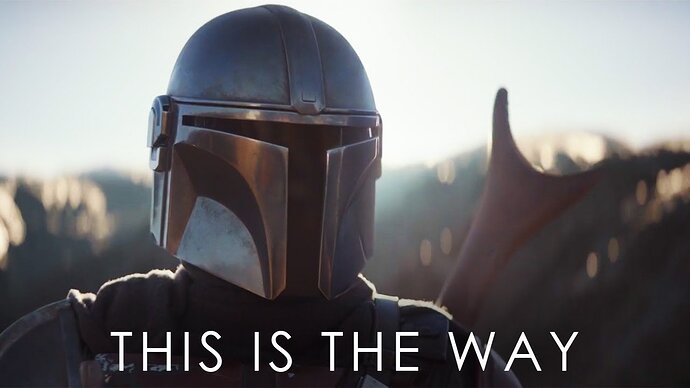 Well… It’s good to know how it works and how to do it. But given the sound I want and the fact that the degradation and conversion just screws that all up. I think I am going to try and mess around with maybe some force effects and whatever else that use these sounds I’ve made, but I don’t know. Thanks @NoSloppy for all the tips and everything though! It is very, very much appreciated.

Here. Check this out.

Damn, that’s really interesting! Plus being able to make it play wav files with custom names! Is this how you did the separate quotes and force effects in your prop? Also, would I break anything if I added a USER5 USER6 etc. and corresponding fields in all those places? Would there be anything more I need to add?

The user defined effects needs some prop support do anything.

The problem with Talkie is that the compression is designed specifically to compress voice data, and pretty much nothing else. The reason I used in ProffieOS is because it’s really small. It’s just a configurable ladder filter and some data tables. Each “frame” of data feeds in new filter coefficients and either some “chirp” data or some noise data into the filter.

However, the filter coefficients are chosen to produce standard english vowel sounds, and the frequency table is limited to frequencies that people use while talking.

Because of how works, the talkie code is really only good for producing talkie-like sounds, anything else is probably just going to turn into garble.

The *_15 sounds use a higher frame rate to get slightly higher fidelity, but of course also uses more data. I found a python program somewhere that can make these sounds. At first I had very little luck with it, but once the input sounds were clean enough I managed to get it to work.

I didn’t use TTS for the error messages though, I just recorded myself.